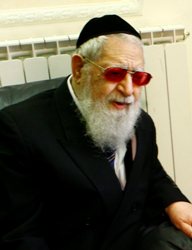 Rabbi Ovadia Yosef yesterday issued a halachic ruling that it is a “great mitzvah to conduct seminars for intermarried couples” interested in building a Jewish home.

Rabbi Yosef was referring to seminars sponsored by the Eternal Jewish Family for intermarried couples that include a non-Jew seeking a halachic conversion and a Jew who agrees to become a baal teshuva. Rav Yosef’s ruling is consistent with many p’sakim of previous and contemporary Gedolei Hatorah who say that unlike ordinary geyrus, it is permitted to be “mekarev” such a couple, particularly where the Jew will be atoning for his/her mistake by becoming a baal teshuva.

These include the late Rabbi Moshe Feinstein and the posek hador of today, Rabbi Yosef Sholem Eliyashiv.

While the couples are still exploring the possibility of such a dramatic move, the seminars are designed to assist rabbonim and mentors that are already working with them to fully educate them about the difficult journey that lies ahead. EJF, for example, works through Batei Din and rabbonim rather than approach the couples directly, per the directives of Gedolei Yisroel. The couples are interviewed extensively to determine their sincerity before being allowed to participate in the seminars.

Batei Din and Rabbonim from around the world have applauded the EJF initiative to assure that the process is in tune with the highest standards of halacha.