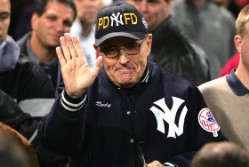 Giuliani said he wants independent hopeful Chris Daggett to quit and lend his support to Christie, whose poll numbers have dropped amid rising support for the third-party candidate.

“I would think he [Daggett] would not want to be the reason why New Jersey has someone like Jon Corzine for governor for the next four years, who wants to raise taxes, raise fees and basically cave in to special interests,” the former mayor told The NY Post.

Giuliani is stumping for Christie today and tomorrow in Jersey.

“I think [Christie] has now gotten to the margin where he can win even with Daggett, but it’d be better if Daggett wasn’t in the race,” Giuliani said.

He also claimed Corzine hasn’t done enough to battle “the culture of corruption in New Jersey.”

“It’s no different now than it was when he started and his party has controlled New Jersey all these years,” the former mayor said.

“As the head of his party, you would think he would have done a lot to straighten this out, but he hasn’t.”

“If Rudy Giuliani wants to give anyone a lecture on ethics, he should start with Christie — the candidate with one set of rules for himself and another for everyone else,” she said.

Daggett spokesman Tom Johnson said his candidate “believes you have to earn votes. Votes aren’t just handed over to Democrats and Republicans as birthright.”

“If you’re going to do it, at least man up and say I’m fat,” said Christie.

Corzine aired a now-infamous TV ad that said the portly Christie “threw his weight around” to avoid getting a traffic ticket.