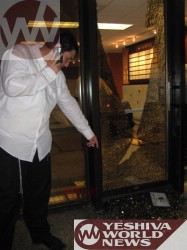 At approximately 9:00PM Monday an unidentified object was shot at the entrance to the Lubavitch Yeshiva Gedolah in Miami, shattering the glass door.

A student was standing at the entrance to the lobby, a few feet from the door of the building at 1140 Alton Road, at the time.

He relates that he heard what sounded like a gunshot, and then the glass door shattered.

He immediately ran inside and alerted the other students, who were learning in the main study hall.

Noone was injured and the police are currently investigating the incident, saying they do not believe it was anti-semitic, but rather a random act.

Rabbi Bentzion Korf, executive director of the Yeshiva, told COLlive that he believes this should be categorized as a hate crime; that it may have been anti-semitic in nature.

“If G-d forbid the shooting would have occured earlier, it could have caused many injuries,” said one shaken student to COLlive. “The building also houses the Mesivta and part of the Elementary school, and a Shul.”

At this time, the police said they have no suspects.