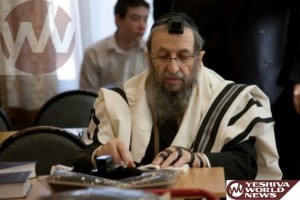 [PHOTO LINK BELOW] It is not every day that a man of such greatness as Hagaon Harav Shmuel Kamenetsky shilt”a graces the Moscow community. The Rosh Hayeshiva and the Rebbetzin arrived on Wednesday 2 Nissan together with the O.O.C. delegation and 20 suitcases full of much needed Kosher l’Pesach products for the Kehilla as well as sefarim and tashmishei kedusha. They were greeted by talmidim of the yeshiva and Mr. Harry Mayer, a founding board member of Operation Open Curtain who had arrived earlier.

The Rosh Hayeshiva delivered a number of shiurim during his short stay, including shiurim for Kollel Yungeleiet, balebatim, and a special address to community women. The entire delegation was received by the Mara d”asra Harav Pinchas Goldschmidt shilt”a at a special reception in his home. Also welcoming the delegation was the new Rosh Hakahal of Moscow Mr. Yakov Sotzkin.

The main address of the Rosh Hayeshiva was Wednesday night and attended by an overflow crowd of mevakshei hashem. Ever since Operation Open Curtain and Ner L’elef set up the Moscow Community Kollel as a joint project, dozens of ba’alebatim have made the Yeshiva their second home as they come each evening as well as early morning to participate in shiurim and chavrusa learning.

After the shiurim the bnai haKehilla lined up to receive personal guidance and brachos from the Rosh Hayeshiva.

During the evening delegation members Mr. Nesanel Davis and Mr. Boaz Kohn met up wiot the group after arriving later in the day.

On Thursday morning the delegation led by the Rosh haYeshiva davened in the Etz Chaim day-school together with the talmidim.

Operation Open Curtain was instrumental in founding the school two decades ago together with Rav and Rebbeztin Goldschmidt. For Mr. Reuven Dessler it was an especially emotional moment to see the talmidim davening beautifully as he remembered the school’s modest beginnings two decades ago.

Harav Kamenetsky addressed the talmidim with a personal message, “Remember, you are not only learning for your own sakes! You are the future of Klal Yisrael, the more you learn in this school today the stronger tomorrow’s Moscow Kehilla will be!”

A special moment during the school visit was the chavrusa learning between delegation members and groups of high school boys. Nobody wanted to stop!

On Thursday evening the entire kehilla gathered in the Yeshiva for the Chanukas Habayis of the new Yeshiva students residence wing which was dedicated by Rabbi and Mrs. Yaakov Rajchenbach and family of Chicago.

Rabbi Rajchenbach and Mr. Dessler officially opened the new rooms and Rabbi Akiva Yosovich, Rosh Yeshiva of Ohaley Yaakov gave the guests a tour of the new rooms. The Rosh Hayeshiva during his remarks at the Seudas mitzvah said over the Midrash that during the Churban Beis Hamikdash sparks from the fire were scattered all over the world, in every place that a spark landed a Makom Torah was eventually established. We can then understand than why when Moshiach comes, all the batei knesiyos and batei medrashim will return with the Yidden to Eretz Yisroel. The mekomos hakedoshim are merely returning to the roots from which they began. Those who are involved in building a yeshiva are in essence rebuilding part of the Beis Hamikdash. Harav Shmuel bentched Rabbi Rajchenbach that he always be witness to spreading kedusha in this world.

On Friday morning five boys entered the bris of Avraham Avinu. The Rosh Hayeshiva served as Sandak for one of them and delegation member Rabbi Shlomo Noach Mandel of Toronto for another of the boys. Rabbi Mandel has been instrumental in the rebirth of kehillos in Eastern Europe working hand in hand with the renowned philanthropist Mr. Albert Reichmann in running the Canadian Foundation for education and welfare in the FSU and in setting up the Shema Yisroel school network serving thousands of children. As one of the boys was a bechor (a first born), Rabbi Mandel, himself a Kohen, performed the pidyon Haben as well.

Later in the day at the Choral shul the group visited the Mikvah. Rabbi Rajchenbach was asked to fill up the mikvah a job usually filled by one of the Kollel yungeleit. The mikvah is one of only a few worldwide that has the hidur of being 100 % mey geshem. Boruch hashem it is well used.

One of the highlights of the trips was definitely the matzah baking on Friday afternoon. For the first time ever in post communist Russia, a chabura baked hand shmura matzah. The bakery is run by Rabbi Shmuel Schwartz who learns in the Kollel. Who would have thought that mere minutes from the KGB headquarters, one of the Gedolei Hador would be baking matzos!

The Rosh Hayeshiva’s main Shabbos drasha was during the Friday night meal attended by over 150 people. As the Midrash relates, when Kayin told his father that one can do Teshuva and receive a kapara Adam Harishon composed “MIzmor Shir Leyom haShabbos”. “This teaches us”, said the Rosh Hayeshiva ,”that Shabbos has the power to change a person just as teshuva does”.

Kiddush on Shabbos morning was hosted by the Operation Open Curtain dormitory, where girls live in a warm Jewish environment, especially on Shabbos and Yom Tov when the apartment is filled to capacity. The dormitory is one of the important links in the chain of O.O.C. mosdos. Girls come from the O.O.C. day-camp and school to the dormitory and then move on to higher learning in seminaries around the world, including the highly successful Bnos Batya program in Brooklyn, which was founded by Operation Open Curtain together with Rabbi Dr. Bernard Lander O”H.

The entire group ate Seuda Shlishis in the Choral shul together with the mara d’asra Rav Goldschmidt shlit”a. The Rosh Hayeshiva expressed his joy at seeing such beautiful crowds gathering for Torah and Tefilla in one of the most beautiful shuls in Europe.

The Rosh Hayeshiva shlit’a then spoke about the word Vayikra and the significance of the small aleph. Quoting Chazal that Moshe Rabeinu in his humility wanted to write the word Vayikar, Harav Kamenetsky said that this is a lesson for every yid no matter how important he or she may be. “Especially in Golus, a yid must be careful to keep a low profile and not push ourselves unnecessarily into the public eye.”

The Rosh Hayeshiva then bentched Rav Goldschmidt shlit”a that he should continue to see nachas from his Kehilla.

At a special Melava Malka together with a group of local balebatim, the gathering was addressed by Rabbi Avrohom Edelstein, director of Ner Le’elef who had come specially from Eretz Yisroel to be with the Rosh Hayeshiva and the delegation for Shabbos. O.O.C. and Ner Le’elef founded the Kollel together over five years ago and continue to work together to serve the kehilla’s growing needs.

The visit left a great impact on the local community who were left inspired and energized by the short yet memorable trip of the Rosh Hayeshiva.