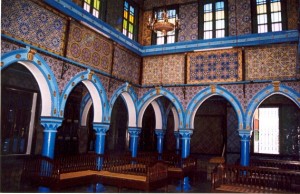 Approximately 6,000 Jews on Sunday ended an annual pilgrimage to Africa’s oldest synagogue, the Ghriba, on the Tunisian island of Djerba.

According to the AFP, most of the pilgrims – around 4,500 came from France – while around a thousand Israelis came via Egypt, Jordan or Turkey due to the absence of direct air links with Israel.

Trabelsi called for direct flights to be established between Israel and Tunisia, adding that it would triple the number of visitors coming from Israel.

France’s Chief Rabbi Gilles Bernheim took part in the pilgrimage for the first time this year “in order to give a message of peace (and) of respect for others.

“I am very moved and very impressed by the Jews’ way of life in Tunisia and their strict strict attachment to an ancient tradition,” Bernheim told AFP.

The El Ghriba synagogue is located in the former Jewish village of Harah Sghira and, according to one tradition, was established by a group of Kohanim, from the Bais Hamikdash, who supposedly settled on the island immediately after the destruction of the first Bais Hamikdash. (The tradition holds that the refugees brought a door and a stone from the destroyed Bais Hamikdash with them.)

The visitors are arriving amid heavy security, with authorities seeking to prevent an attack similar to the one carried out by a suicide bomber at the site in 2002 that killed 21 people.

Police set up barricades, while an electronic gate filtered visitors entering the area around the sacred site, believed to be 2,500 years old.