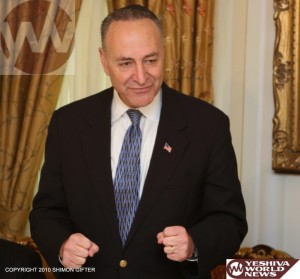 United States Senator Charles E. Schumer called on Iranian President Mahmoud Ahmadinejad to commit to the Nuclear Non-Proliferation Treaty or return to Iran. Ahmadinejad announced his intention to attend the non-proliferation conference at the United Nations this coming week, despite the fact that the Iranian president has pressed ahead with a uranium enrichment program most believe will be used to develop a nuclear weapon. Schumer also called on the UN Secretary General to condemn Ahmadinejad immediately for any hateful remarks he delivers.

“It’s a complete slap in the face for President Ahmadinejad to come to the United Nations for nuclear non-proliferation talks while at the same time pursuing an illegal nuclear weapons program in Iran,” said Schumer. “My message to Mr. Ahmadinejad is to come clean on your nuclear ambitions or go home.”

Ahmadinejad’s trip to the United Nations this week comes in the face of serious negotiations between the United States and European allies to impose stringent sanctions on Iran for its failure to live up to international obligations for transparency of its uranium enrichment program. Sanctions against the state could include an arms embargo and limitations of foreign investment in the country’s energy sector.

The United Nations’ month-long nuclear non-proliferation conference is held every five years to reaffirm and strengthen the Non-Proliferation of Nuclear Weapons Treaty, which was signed in 1970. The purpose of the conference is to find agreement on a declaration that would address the Treaty’s overall implementation and strategies and measures to strengthen it.

Iran, a signatory to the 1970 treaty, was found to be in violation of it in 2003 when it was discovered the county has been hiding a secret nuclear program for close to two decades. Iran has consistently claimed that its uranium enrichment program is for peaceful purposes, yet has been less than forthcoming. This past fall, the United States, Great Britain and France revealed that Iran had established a secret nuclear plant hidden inside a mountain.

In a visit to the United Nations General Assembly in 2008, the Iranian President used the platform to spew a hate-filled diatribe against the State of Israel, Jews worldwide, and the United States government. His speech was widely condemned by the international community.

“I urge the UN Secretary General to send a clear message to the Iranian president that he needs to come clean on his nuclear weapons program and not use the UN as a platform to launch another hate-filled diatribe. If he does, the Secretary General needs to immediately condemn his hateful remarks.”