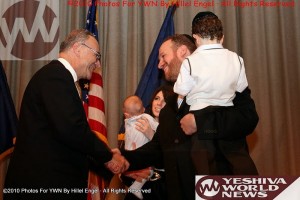 Over 500 people gathered at Franklin D. Roosevelt High School on 20th Avenue in Boro Park, Brooklyn on Sunday, May 2, 2010 to pay tribute to Councilman David G. Greenfield at an inauguration ceremony that marked the beginning of his tenure as a member of the New York City Council. Greenfield began his work as a city councilman 25 days ago, but because of sefirah, he waited until Lag B’Omer to celebrate his inauguration.

In a Special Election held on March 23, 2010, Greenfield was overwhelmingly elected to represent the 44th Council District and won every single neighborhood in his district including Boro Park, Midwood and Bensonhurst.

Greenfield began his inaugural address by noting the importance of the day – Lag B’Omer – and explaining that we can learn great lessons from Rabbi Akiva and the loss of his 24,000 students at the hands of a plague because of their lack of mutual respect for one another.

“I really believe that one of the things that we have lost in politics is our civility,” said Greenfield. “This comes with dire consequences. After all, if we can’t even agree to disagree, how are we ever expected to agree on anything? That is why immediately after the election, I reached out to those that did not support me to ask them to join with me and work together on behalf of the community. Campaigns and elections are one thing; getting things done is another.”

During his remarks, Greenfield reviewed some of his accomplishments in the 25 days that he has been in office including, rescheduling a tree-pruning that fell out on Pesach, increasing pre-Pesach garbage collection for parts of the community that never had it before, meeting with all of the yeshivas in the community to talk about their priorities, forming a group of elected officials to advocate on behalf of the restoration of Priority 7 vouchers, meeting with every major social service agency in the community to talk about their needs during the budget process, securing a commitment from the Deputy Mayor to create a committee to explore his plan for free door-to-door transportation for students, and working to prevent hate crimes and robberies in our community by offering cash rewards to highlight these crimes and ensure that the perpetrators get caught.

In addition, Greenfield listed several of his major priorities that will take some time to achieve, comparing these to the rock that Rabbi Akiva discovered that had a hole in it from years of dripping water. These priorities include, devising a way to help those who are unemployed and losing their homes in our community, trying to build affordable middle-class and senior housing in the community, looking at how the city assess taxes on homes and condos and make sure that those assessments are fair and equitable, ensuring that students keep their free Metrocards to get them to and from schools, ensuring that access-a-ride stays intact, and making certain that our senior centers are open. As Greenfield explained, “In short, we have a lot more work to do and we will do it, but we are mindful that like the water dripping on the rock, some of these changes will take time.”

In addition to the many elected officials that attended, numerous community leaders and prominent religious leaders joined together with Councilman Greenfield at his inauguration ceremony.

“I am grateful for the show of support that I have received from the entire Brooklyn community,” said Councilman Greenfield.  “Joining together with family, friends, fellow elected officials, constituents, and supporters to mark the beginning of my term as a City Councilman was a humbling experience.  I look forward to working with all of these leaders to make New York City more affordable and to enhance the quality of life of all of our residents.”

Click HERE for photos by Hillel Engel for YWN.