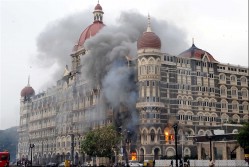 Less than a year before terrorists killed at least 163 people in Mumbai, India, a young Moroccan woman went to American authorities in Pakistan to warn them that she believed her husband, David C. Headley, was plotting an attack.

Two years earlier, in 2005, an American woman who was also married to the 50-year-old Mr. Headley told federal investigators in New York that she believed he was a member of the militant group Lashkar-e-Taiba created and sponsored by Pakistan’s powerful intelligence agency.

Despite those warnings by two of his three wives Mr. Headley roamed far and wide on Lashkar’s behalf between 2002 and 2009, receiving training in small-caliber weapons and countersurveillance, scouting targets for attack, and building a network of connections that extended from Chicago to Pakistan’s lawless northwestern frontier.

Then in 2008, it was his handiwork as chief reconnaissance scout that set the stage for Lashkar’s strike against Mumbai, an assault intended to provoke a conflict between nuclear-armed adversaries, Pakistan and India.

An examination of Mr. Headley’s movements in the years before the bombing, based on interviews in Washington, Pakistan, India and Morocco, shows that he had overlapping, even baffling, contacts among seemingly disparate groups — Pakistani intelligence, terrorists, and American drug investigators.

Those ties are rekindling concerns that the Mumbai bombings represent another communications breakdown in the fight against terrorism, and are raising the question of whether United States officials were reluctant to dig deeper into Mr. Headley’s movements because he had been an informant for the D.E.A.

More significantly, they may indicate American wariness to pursue evidence that some officials in Pakistan, its major ally in the war against Al Qaeda, were involved in planning an attack that killed six Americans.

The Pakistani government has insisted that its spy agency, the Inter-Services Intelligence Directorate, a close partner of the C.I.A., did not know of the attack. The United States says it has no evidence to counter this, though officials acknowledge that some current or retired ISI officers probably played some role.

It is unclear what United States officials did with the warnings they had gotten about Mr. Headley — who has pleaded guilty to the crimes and is cooperating with authorities — or whether they saw them as complaints from wives whose motives might be colored by their strained relations with their husband.

Federal officials say that the State Department and the F.B.I. investigated the warnings they received about Mr. Headley at the time, but that they could not confirm any connections between him and Lashkar-e-Taiba. D.E.A. officials have said they ended their association with him at the end of 2001, at least two months before Mr. Headley reportedly attended his first terrorist training. But some Indian officials say they suspect that Mr. Headley’s contacts with the American drug agency lasted much longer.

The investigative news organization ProPublica reported the 2005 warning from Mr. Headley’s American ex-wife on its Web site and in the Saturday issue of The Washington Post. By ProPublica’s account, she told authorities that Mr. Headley boasted about working as an American informant while he trained with Lashkar.

On Saturday, Mike Hammer, a spokesman for the National Security Council, said in a statement, “The United States regularly provided threat information to Indian officials in 2008 before the attacks in Mumbai.” He also said, “Had we known about the timing and other specifics related to the Mumbai attacks, we would have immediately shared those details with the government of India.”

Mr. Headley’s American wife was not the only one to come forward. The Moroccan wife described her separate warnings in an interview with The New York Times. Other interviews illustrate his longstanding connections to American law enforcement and the ISI.