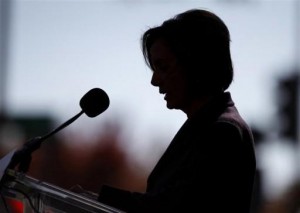 Democrats elected Nancy Pelosi as their minority leader on Wednesday, but only after a brutal two days of arguing behind closed doors and a 150-43 vote that revealed a bloc of disgruntled Democrats to be firmly in the anti-Pelosi camp.

Pelosi’s win as Democratic leader was expected, but the bumpy ride was perhaps the greatest challenge to her authority since she claimed the speaker’s gavel four years ago. Pelosi defeated conservative Democrat Heath Shuler of North Carolina, who ran for minority leader saying “We need to include others in leadership.”

Pelosi’s victory all but assures that the Democratic leadership team will remain intact despite a historic loss of at least 61 seats in the Nov. 2 election. Several moderate lawmakers in the anti-Pelosi camp used two days of private meetings to vent their frustrations, and in some cases blame Pelosi for the heavy Democratic losses.