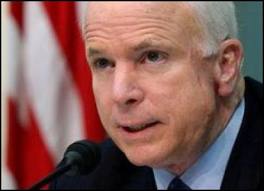 “The rapidly deteriorating situation in Egypt leads me to the conclusion that President Mubarak needs to step down and relinquish power. It is clear that the only institution in Egypt that can restore order is the army, but I fear that for it to do so on behalf of a government led by or involving President Mubarak would only escalate the violence and compromise the army’s legitimacy. I urge President Mubarak to transfer power to a caretaker administration that includes members of Egypt’s military, government, civil society, and pro-democracy opposition, which can lead the country to free, fair, and internationally credible elections this year as part of a real transition to democracy.

“All Americans should be appreciative of President Mubarak’s long record of cooperation with our government, which has helped to fight terrorism and promote peace and security in the Middle East and North Africa. I remain concerned about the role of the Muslim Brotherhood and other organizations in Egypt that espouse an extremist ideology. But Egypt must have a democratic future. It is the will of the Egyptian people. It is in the interest of the United States. And the greatest contribution that President Mubarak can make to the cause of democracy in his country is to remove himself from power.”