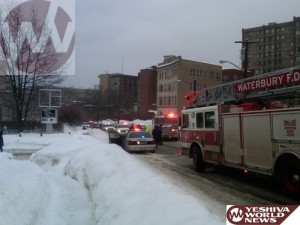 Roofs caved in as a massive snowstorm enveloping much of the nation invaded the Northeast on Wednesday, bringing buildings to the breaking point in a winter that has already delivered more snow than many cities typically see in a whole season. No one has been seriously injured.

There were several reports of structural collapses around the region, including a gas station canopy on New York’s Long Island and an airplane hangar near Boston. In at least two places, workers’ sense of hearing allowed them to narrowly escape.

Amongst the reported collapses, is the following story and attached photos, which was submitted by a YWN reader in Waterbury Connecticut.

The former Sena’s Duckpin Bowling center was completely destroyed Wednesday when its roof collapsed under the weight of the snow.

State search dogs were called in to look for homeless who may have been living in the abandoned building, but turned out that no one was inside at the time of the collapse.

“The whole building collapsed,” he said. “It looks like a bomb went off, literally.”

Utility workers disconnected electrical and gas lines, but Martin said the building needed to be made safe before even dogs were allowed to go in.

Sena’s Duckpin Bowling operated on North Main Street for more than 50 years before closing in 2000. It has been mostly abandoned since.