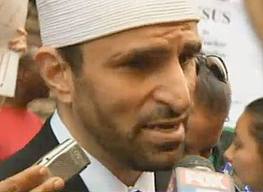 The beleaguered mosque and Islamic center planned for Ground Zero suffered yet another setback when its chief religious adviser abruptly resigned yesterday — after three weeks on the job.

Imam Abdallah Adhami, 44, who had come under fire for controversial remarks about people “leading an alternative lifestyle” and people who leave Islam, and Park51 developers issued a joint statement saying he was departing as senior imam.