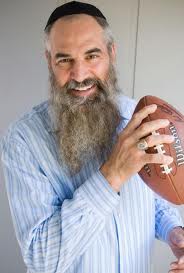 The following is via the Morristown Patch: For seven years, Alan Veingrad made his living by pushing around some of the most physically intimidating defensive lineman in the National Football League.

At age 47, Veingrad, who now goes by his Jewish name Shlomo, meaning “God’s Peace,” no longer studies the tendencies of his opponents across the line of scrimmage each week, but rather, he studies the religion of Judaism with the same intensity and vigor that made him a Super Bowl champion.

Veingrad explained his transformation to an audience of about 70 people from throughout the area at the Knoll Country Club East in Parsippany last Sunday.

Rather than donning a helmet and shoulder pads while playing in front of 75,000 people, Veingrad now sports a long gray beard and yarmulke, working as a transformational speaker, sharing the values and personal practices that helped sculpt his metamorphosis from professional football player to observant Jew.

During his playing days, Veingrad, who says he never once experienced any anti-Semitism throughout his career, acknowledges that many of his teammates were more curious about his religion than even he was, regularly approaching him with questions about Judaism, for which he would have no answers.

Playing college football at East Texas State University (now Texas A&M University- Commerce), a school located in Texas’ Bible Belt community, Veingrad explains that many of his teammates would often tell him that he was “the only Jew they had ever met.”

“They would ask me questions like, why eight days of Chanukah?” he said. “Not only did I not know, but I didn’t care.”

“The people I’m speaking to,” he said, “I believe I grew up like most of them as it relates to Judaism. My message to them is just grow a little bit. Just look into [Judaism] a little more. It gives you more in life.”

Raised as a secular Jew, the 6-foot-4 Veingrad had no interest in his religion. As a child, he had no desire in attending Hebrew School and, like many Jews, his association with the religion ended immediately following his Bar Mitzvah.

At the age of 9, Veingrad and his family relocated to Miami from Brooklyn. It was then that he had his interest peaked, not in Judaism but rather in sports. The combination of watching his older brother excel in high school sports, while simultaneously witnessing the Miami Dolphins’ perfect season of 1972, Veingrad began to question what he wanted for his life.

After a family friend awarded Veingrad the opportunity to work on the sidelines during Dolphins games, raising and lowering the net during field goal attempts- and also gaining access to the Dolphins locker room before after games, his interest in sports was elevated to an even high level.

“I wanted to go into the locker room and see what a professional football players looked like,” he said. “I wanted to see their muscles.”

Standing over 6-feet tall as a 14-year-old, Veingrad began to want what his brother and his idols in orange and teal had experienced. Veingrad wanted to be a football player.

But as a wiry high school freshman, Veingrad knew that he needed to better prepare if he wanted to become a football player, so he began working with Miami Sunset High School strength and conditioning coach Chuck Almeida, following a strict workout regimen, while at the same time, learning an important life lesson.

Almeida’s message to his pupil was a simple one–and Veingrad applies it to much more than just lifting weights. “The lesson of preparation,” Veingrad said to the group. “Prepare yourself for the weight room, and your body will grow.”

After five seasons at ETSU in which he garnered All-America and National Strength and Conditioning All-America honors, Veingrad was signed as an undrafted free agent by the Green Bay Packers.

After a successful preseason—coupled with a contract holdout by the starting right tackle—the Brooklyn native was named as the starter for the Packers on opening day. He would go on to start all 16 games for Green Bay in 1986.

It was now that Veingrad’s transformation to Alan “Shlomo” Veingrad would begin to take effect as lessons he learned both on and off the football field would help lead him to the path that he now follows.

Shortly after making the Packers roster, Veingrad was invited to lunch by a local businessman by the name of Lou Weinstein. An offensive lineman, Veingrad explained that he wasn’t the type of person to ever turn down a free meal, but he quickly learned that this meeting wasn’t just a lunch date.

At the time, Veingrad was living in a motel across the street from Lambeau Field and renting a car—that is, until Weinstein, who had read about Veingrad in a local Jewish newspaper, offered him assistance finding a car, a place to stay, and a meeting with his financial advisor.

But Weinstein’s influence took on a new role when he invited Veingrad to his home for religious observation, introducing him to members of the Jewish community, Jewish foods and accompanying him to synagogue.

It was the beginning of a religious awakening for Veingrad, who was now more involved in Judaism than ever before. While he was involved in the religion that he had done his best to avoid throughout most of his life, he still didn’t have the desire to learn about it, rather he was simply going through the motions as a courtesy to the people who had helped a young man in a new city.

After five seasons with Green Bay, Veingrad moved on to play for head coach Jimmy Johnson and the Dallas Cowboys.

It was after the 1992 season that Veingrad decided to walk away from the game. Even with one year remaining on his contract, Veingrad explains that seven years in the NFL had taken its toll on his body and he no longer had the desire to line up against brutalizing defensive linemen. It was time to focus his attention and desire on something different.

Four years later, as Veingrad was enjoying the retired life, spending his days boating, golfing and traveling, living, as he puts it “the good life,” he felt that something was missing.

“You can’t see a target, unless you focus on your target,” a lesson that he learned during his first season in Green Bay. “Do you know what your focus is? Are you zeroing in on your target?”

Veingrad didn’t have a target. He wasn’t sure what to focus on.

Soon, that all changed.

While attending his first Torah study of his life—mainly as a way to placate his cousin—Veingrad found himself more interested in the beautiful house that he was sitting in, than he was with the religious lesson being taught.

That is, until the words of the Rabbi grabbed a hold of him, similar to how the words of Almeida or Johnson had done so to him years earlier.

“He was talking about materialism,” Shlomo said. “And materialism in your life can lead you to a very shallow existence. And that’s exactly where I was.”

It was at this exact moment that Veingrad’s transformation to Shlomo took its first giant leap, as the words of the Rabbi captured exactly what the former footballer was feeling at that exact time.

The Jewish religion had never seemed as important to Veingrad as it did in this very moment and the inspiration guided Veingrad to taking a trip to Israel, and again, Veingrad’s journey in Judaism took yet another step.

Now at age 47, Veingrad hopes that he can help influence people the same way that he has been. He hopes to use his fame as a former NFL player and Super Bowl champ to help give others a better understanding of the “focus, desire and passion” that it takes to not only embrace the Jewish religion, but to embrace many parts of their lives.

“When you play in the NFL and you look like I look today and you have a Super Bowl ring, I think people happen to raise their eyebrow a little bit as they may not to a Rabbi and say, ‘this guy played in the NFL and won a Super Bowl and he’s telling me that a Jewish life and a Jewish education can give me a better life? Maybe I’ll look into it a little bit,'” he said.

“I just want to move their spiritual change a little bit.”