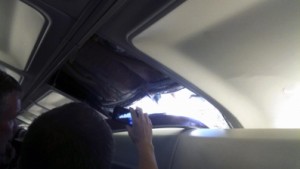 Southwest Airlines announced Saturday that it is grounding 79 planes for inspection after a 3- to 4-foot hole tore open in the fuselage of one of its planes, bringing a view of the blue sky and a white-knuckled emergency descent.

The plane — which had been traveling from Phoenix to Sacramento, California — managed to make an emergency landing at a military base in Yuma, Arizona, on Friday. There authorities “discovered a hole in the top of the aircraft,” the company said earlier.

Investigators are trying to determine what caused the “depressurization event” and have “decided to keep a subset of its Boeing 737 fleet out of the flying schedule to begin an aggressive inspection effort in cooperation with Boeing engineers,” according to a company statement.

“The safety of our customers and employees is our primary concern, and we are grateful there were no serious injuries,” said Mike Van de Ven, Southwest’s executive vice president and chief operating officer.

The airline initially reported that 81 of its Boeing 737 aircraft would be grounded, but later decreased the number of planes to be inspected for what it called “aircraft skin fatigue.” The inspections will take place at five locations over the course of the next several days, the airline said.

A subsequent review will investigate the aircraft’s structure, metallurgical aspects of the plane, flight data recordings and its maintenance records, he said.

Most of the passengers were complaining of a pain in their eardrums from a rapid descent.

Southwest Airlines said only one injury was reported.

“There are no reported customer injuries,” according to a statement released by the airline. “One of the flight attendants, however, received a minor injury upon descent.”

An NTSB investigative team arrived Saturday in Yuma and entered the plane.