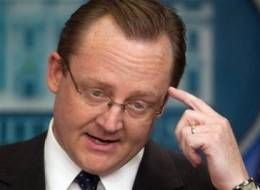 “You’re going have a choice between going forward or going backward to a lot of the problems that got us into this mess,” Gibbs said, referencing a top tier of GOP candidates that includes Texas Gov. Rick Perry (R), former Massachusetts Gov. Mitt Romney (R) and Rep. Michele Bachmann (R-Minn.). “I think there’s going to be a very clear choice in this election in 2012.”