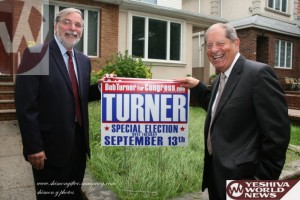 Assemblyman Dov Hikind argues that Obama’s speech in opposition to U.N. recognition of Palestine was the result of the special election to replace Anthony Weiner.

The following is a quote that Hikind gave to the NY Post:

“I was thinking of issuing a press release claiming credit for the Israel speech. Two weeks ago, the speech would have been different,’’ said Hikind, an Orthodox Jew who backed Turner over Democrat David Weprin — also an Orthodox Jew.

“The speech by President Obama indicated that he read the results of the special election in the 9th Congressional District. Clearly, the election had an effect. The speech leaves little to complain about.’’

It should be noted, that Hikind first crossed party lines to endorse Turner on September 7th, days after many reports (including this one) which stated that the Obama Administration had told the Palestinian Authority that the United States would veto any request made to the UN Security Council to make a Palestinian state. In fact, as early as August 8th, the NY Times stated that the administration would veto any request.