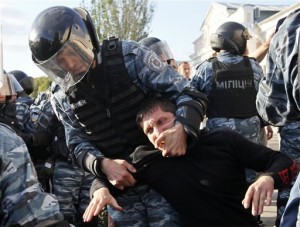 Several hundred local Ukrainians reported affiliated with the Liberty Party took part in a protest against the arrival of tens of thousands of Yidden in Uman ahead of Rosh Hashanah. They protested against the annual event, leading to the arrest of at least 100 persons.

Local officials report that a local court banned the protest, leading to the arrests.

Amid terror threats against Israelis and Jews in numerous areas around the world, Israeli security agencies are involved in security arrangements in Uman, as well as for Chabad House situated around the globe.