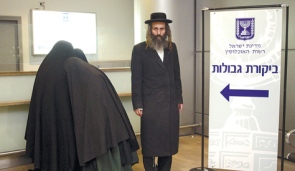 The Rishon L’Tzion Family Court this week has signaled a ruling surrounding the legality of the Lev Tahor sect will be forthcoming in the immediate future. The case surrounds what is more popularly referred as the Jewish Taliban women, seen primarily in an area of Beit Shemesh.

The case surrounds two sisters, residents of Bet Shemesh, members of Lev Tahor. They were originally sent to the sect’s community near Montreal, Canada, but in the interim, family members fearing for the well-being of the 13 and 15-year-old petitioned the Israelis courts, which agreed to hear the case. The paperwork was filed and a court order was issued for their return. Canadian authorities met the girls and escorted them back to Israel on Sunday in compliance with the court order. The move involved a number of agencies, including the Foreign Ministry and Interpol.

Canadian officials realized that it was Rosh Hashanah and Shabbos, placing the girls in an agency until their departure from Canada after Yomtov and Shabbos.

The parents of the girls decided the community in Canada would be suitable and sent them from Beit Shemesh to N. America, hoping to have them there in the Lev Tahor village in time for Rosh Hashanah. The family members who petitioned the court feared that in the cult’s community, the Lev Tahor village, they would be compelled to get married in line with the groups hashkofa towards keeping them pure.

Judge Rivka Makayes is expected to hand down a ruling next week, a ruling that may determine if belonging to the sect is deemed illegal or acceptable under local law. The family members who petitioned the court maintain the children are stripped of all basic rights, seeking to have the sect outlawed, insisting is poses a serious threat to the well-being of children.

If the court declares Lev Tahor illegal sate welfare officials may indeed begin the process of removing minor children from such homes, a move that would undoubtedly result in a confrontation in Beit Shemesh, a stronghold for that community.

The leader of the Lev Tahor community, Shlomo Elbarnes, is reported to be from the Yerushalayim neighborhood of Kiryat Yovel. After running into legal issues with the sect in the United States, where he operated for many years, Elbarnes moved his followers to the community near Montreal.

The family in Beit Shemesh is being represented by attorney Yair Nehorai. When the girls arrived back in Ben-Gurion International Airport they met with a social worker. At that time, the parents were unaware of their return, later notified by officials that the girls were escorted back to Israel by authorities. The parents were told they would not receive custody of the girls without signing that they will not attempt to send them out of the country again. Nehorai then came into the picture.