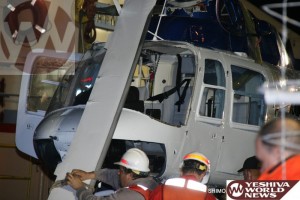 Thanks to the fast response and heroic work by the NYPD & FDNY, four people were rescued from yesterday’s helicopter crash into the East River in Manhattan. Shimon Gifter was on the scene and interviewed some of the heroes from the NYPD’s Emergency Service Unit – some of whom took off their gun belts and jumped straight into the East River to save those clinging to the bottom of the chopper.

The water was murky, the current was swift and the chopper that sputtered and landed upside-down in the East River was sinking like a bag of stones.

It was hard enough trying to rescue the two men who were clinging for dear life to the drowning helicopter’s skids.

But there were two women floating unconscious near the wreckage who could do nothing at all to help themselves.

YWN PHOTO LINK #2: Click HERE for photos of the chopper being removed from the water