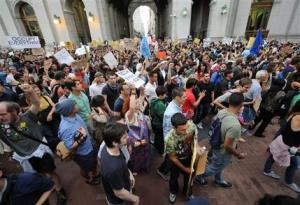 Protesters from the Occupy Wall Street movement plan to leave their downtown Manhattan headquarters Tuesday and head uptown as part of a “Millionaires March” visiting the homes of some of New York City’s wealthiest residents.

The marchers will hold oversize checks they say demonstrate how much less the wealthy will pay when New York State’s two percent tax on millionaires expires at the end of the year.

“Ninety-nine percent of the residents of New York are going to suffer from this tax giveaway so the one percent who already live in absolute luxury can put more money in their pockets,” Doug Forand, one of the march organizers, told the New York Daily News. “This is fiscally, economically and morally wrong.”

The march is scheduled to begin at 59th Street and Fifth Avenue about 12:30pm then continue to the Upper East Side.

Organized by lobby groups the Working Families Party, New York Communities for Change, Strong Economy for All and United NY, members of the Occupy Wall Street movement are expected to form the bulk of participants.

Now in their fourth week, the Occupy Wall Street protests began in New York’s Zuccotti Park in Lower Manhattan and have since spread across the United States.

Demonstrators are also expected to gather Saturday in the Swiss cities of Zurich, Geneva and Basel for protests modeled after the marches against U.S. authorities and the banking industry. And a dozen protest actions are planned throughout the day in Austria — including in Vienna, Linz, Salzburg, Graz and Innsbruck.

On Monday, as temperatures in New York pushed past 80 degrees, New York City Mayor Michael Bloomberg said he would allow the protesters to remain in Zuccotti Park indefinitely if they abide by the law.

He also speculated that changing weather might limit the protest’s duration, The Wall Street Journal reported.

But the protesters themselves said they have no plans to leave once colder conditions set in.

“We might have fewer people stopping by in the winter months but we’ll plan, mobilize, organize, maybe get some permits during the winter,” said Ed Needham, part of Occupy Wall Street’s press team.

Protesters insisted that they are marshaling donations to prepare for colder conditions. Organizers have already designated a team to handle donations of clothing and is encouraging supporters to send sleeping bags, blankets, coats, hand-warmers, gloves and hats.