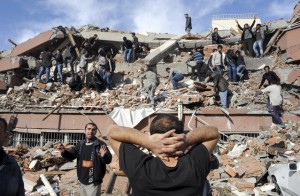 As the devastation of this week’s earthquake in Turkey becomes increasingly apparent, Turkish officials have officially turned to Foreign Minister Avigdor Lieberman, asking for Israeli assistance.

Foreign Ministry officials have approved the requested and have already instructed the relevant agencies to begin preparing to send humanitarian aid to Turkey as expeditiously as possible.  While Turkey originally turned down Israeli offers for humanitarian aid, it is becoming increasingly clear that the magnitude of the disaster of the quake demands additional assistance and expertise.

Israel’s IDF Homefront Command search & rescue unit has literally traveled the world in its effort to provide humanitarian aid, as well as establishing field hospitals that have saved countless lives in similar situations, without regard for political, racial or other considerations.