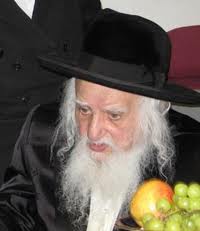 HaGaon HaRav Menashe Klein zt”l, the Ungvar Rebbe, was niftar on erev Rosh Hashanah in a Jerusalem hospital. He was buried in the ancient cemetery in Tzfat, in line with the late rebbe’s will. While he was niftar in a Yerushalayim hospital and lived in the capital, we know one does not take a niftar out of the city but his kvura was decided upon in line with the rebbe’s own wishes. In addition, rabbonim shlita of the Badatz Eida Chareidis discussed the rebbe’s wishes and permitted the kvura in another city.

According to a Chadrei Chareidim report, there has not been a kvura in that beis hachaim for over 40 years and the rebbe’s kvura was a precedent-setting event. Rabbi Tzemach Mazuz is quoted by Chadrei Chareidim saying “there is a cheirim on that beis hachaim for 40 years as a result of it being so full. Since the cheirim, no one has been buried there.

“I don’t dare enter into this regarding Rav Menashe Klein zt”l, whose status is known, a giant among giants. He was interred in an area that is not full in compliance with his wishes and he checked into it.

“However, his kvura may have opened a door, for others may request kvura there too and I will consult with rabbonim if this is the case.

“I want to refute rumors attributed publicized in my name and taken out of context as if I said me must exhume the rebbe chas v’sholom and move him to another beis chaim chas v’sholom.

“The area is question is close to the Beit Yosef, surrounded by kevarim. It is simply not logical that at this particular place there are no graves. It is no surprise that the burial was done secretly with only a small number of people present. Anyone who saw how it was done and what was involved understands full well.

“Even the kvura of the rebbe’s grandparents Rav Amram Chassida (Rosenblum) faced similar problems. According to the legend, he found a place for kvura in this overcrowded beis hachaim through a dream, directing him to a vacant plot.

“If the folks of Asra Kadisha were here now, the city would be ablaze”.