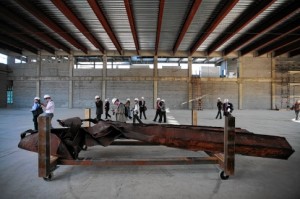 You’d expect George W. Bush’s library to be Texas-sized, and 43’s monument to his eight years as President won’t disappoint when it opens in the spring of 2013.

But a solitary jagged, twisted reminder of New York City’s worst day will unquestionably become the centerpiece of the 43,000 artifacts available for display at the library and its adjoining institute.

The 16.7-foot, 1.85-ton piece of mangled steel isn’t just any relic from America’s hallowed ground — experts say it’s “impact steel,” struck directly by one of the hijacked jets that slammed into the Twin Towers on 9/11.

Engineers who have studied the steel — known as a C-11 panel — say it’s the remnant of a triple-beam and crossbeam section from three upper floors.

“Their analysis shows that it appears this piece of steel was affected by fire before a structural collapse, and that the torques and twists of the steel appear to have been caused by impact versus collapse,” a library official said.

Bush and former First Lady Laura Bush recently were visibly affected when they saw the relic for the first time, according to officials who were there.

“The President and Mrs. Bush were really moved by the sight of the twisted steel, which really for them evoked both the carnage and courage of that day,” Bush spokesman Freddy Ford told the Daily News.

The steel will be on permanent display in the main exhibition hall, anchored in a vertical position. Curators expect it to be a powerful magnet for visitors, who can touch it.

“People have so many emotions of that troubling day that we thought it was critical to the experience to make it accessible,” said Alan Lowe, who runs the library for the National Archives and Records Administration.

Library officials saw the steel last December during a tour of the Port Authority’s Hangar 17 at John F. Kennedy International Airport. The PA enthusiastically agreed to donate the piece to the library, and it arrived in Texas earlier this year.

It will share top billing with another 9/11 icon — the famous bullhorn Bush used when speaking to rescue workers from Ground Zero three days after the attacks. Several other mementos will also be on display, including Bush’s handwritten notes from his first public statement on the tragedy.

The library and institute are the repository for 70 million pieces of paper and 80 terabytes of electronic data, including 200 million emails. A full-scale reproduction of the Bush Oval Office will be featured, and Laura Bush has created a Texas rose garden and a North Texas native prairie.

But they all pale by comparison to an ugly piece of steel salvaged from the moment that changed a nation, a President, and all of us forever.