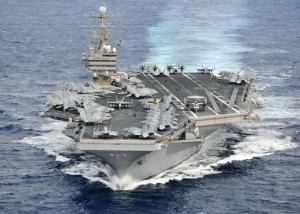 A senior Iranian commander said Thursday that Washington was “in no position” to give orders to Iran when it comes to the Strait of Hormuz, as tensions continued to rise between the countries over the key oil transit channel.

General Hossein Salami, the deputy commander of Iran’s Revolutionary Guards, said that “the Islamic Republic of Iran asks for no other country’s permission for the implementation of its defense strategies,” Iran’s state-run Press TV reported.

Over the past week, Iran has repeatedly warned it could impose sanctions on oil exports and threatened to block the strait, which is used to transport about 15 million barrels of oil per day, The Wall Street Journal reported.

George Little, the Pentagon press secretary, said Wednesday that “any attempt to close the strait will not be tolerated,” which angered Iranian officials.

His comments were echoed by the US Navy’s Fifth Fleet, which said any country that “threatens to disrupt freedom of navigation in an international strait is clearly outside the community of nations.”

Responding to the US stance, Salami said Thursday, “Our response to threats is threats.”

Earlier Thursday, Iranian official Commodore Mahmoud Mousavi said that a US aircraft carrier entered a zone near the strait, which is being used by the Iranian Navy for war games.

“A US aircraft carrier was spotted inside the maneuver zone … by a navy reconnaissance aircraft,” Mousavi was quoted as saying by the state-run IRNA news agency.

The vessel was believed to be the USS John C. Stennis, one of the US Navy’s biggest warships.

The US, the EU and key Arab states recently intensified discussions about the possibility of imposing an embargo on oil purchases from Iran.

US President Barack Obama was expected in the coming weeks to sign new legislation preventing any business dealings with Iran’s Central Bank, through which Tehran executes most of its oil sales. The US Congress passed the restrictions Dec. 15 as part of a bill authorizing more than $660 billion in defense spending over the next year, the WSJ reported.