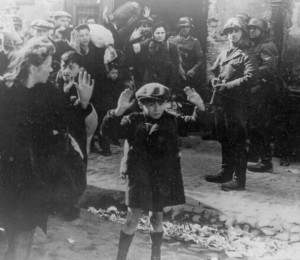 Aryeh Simonson, the boy photographed in Warsaw during WWII in the famous pose, with his hands raised, expressed outrage over the motzei Shabbos rally at Kikar Shabbos in which a young child mimicked the pose while wearing a yellow star.

Speaking to Galei Tzahal (Army Radio), Simonson, a resident of southern England, stated that their actions on motzei Shabbos simply was a blow to the honor of our People, calling the parents responsible “crazy”, suggesting that they be institutionalized. Wearing the uniform and the yellow star was simply “a disgrace and a Chilul Hashem” he added.

He adds that events in the Warsaw Ghetto did not compare to what extremists in Meah Shearim claim is being done to them today. “I saw dead bodies all over, and mothers screaming as their infants were taken from their arms, thrown in the air only to land on their bayonets. In reality, what is taking place in Meah Shearim is nothing. They are acting like the Muslim fundamentalists, who place their children in the front lines” he added.

He recalled the photo, which became a symbol, explaining it was about the time his parents received work permits. They requested that he join them, not wanting their small son to remain alone. “At the end of a day’s work, we received a bowl of soup and a cabbage leaf. I don’t recall why I put my hands in the air. Perhaps I was instructed to, but I can say I don’t remember the day of the photo.”

He adds that being seen with his hands in the air is not an honor and he would have preferred a photo showing him holding a hand grenade.