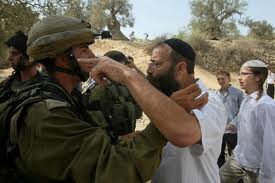 Armed with administrative orders signed by IDF Central District Commander Major-General Avi Mizrachi, government forces during the predawn hours burst into homes in a number of communities including Elon Moreh, Maoz Esther, Gilad Farm, Yitzhar and Ramat Migron. The troops entering the homes wore masks, leading some to believe that they were under attack. They issued administrative orders to 12 people, distancing them from their homes.

IDF officials explain that they are acting on intelligence information that compels the move to distance the twelve from Yehuda and Shomron, working together with the ISA (Israel Security Agency – Shin Bet). The 12 are suspected of conspiring to commit attacks against Arabs as well as compromising area security, IDF officials report. They are now being charged with a crime and therefore, they cannot defend themselves. The government is once again using archaic emergency laws to remove them from the area by means of an administrative order.

The following statement was released to the media by the IDF Spokesman’s Office:

“Tonight, January 04, 2012, the Judea and Samaria District of the Israel Police delivered administrative restraining orders signed off by GOC Central Command, Major-General Avi Mizrahi, based on recommendations of the ISA, to twelve activists for periods ranging from three months up to nine months.

“The orders follow the culmination of information recently gathered by the ISA, according to which the group of extremists has been involved in leading, directing and executing violent and clandestine activity targeting Palestinian residents of Judea and Samaria and security forces operating in the area, therefore endangering lives and disrupting public order.

“It should be noted that the issuing of these orders derives from a specific security necessity, and after exhausting all other alternatives. These orders are a preventative measure to remove the threat by the activists in the area.”

One of the 12 is Yishai Marzel, son of veteran Hebron resident and activist Baruch Marzel, who upon hearing of the situation stated that he is proud to be the father of such a fine young may, one who gives of himself on behalf of Eretz Yisrael. He added that just as we survived Paro in Egypt and Antiochus, we will survive Prime Minister Binyamin Netanyahu, Defense Minister Ehud Barak and the Likud government.

The Honenu human rights organization lamented the situation, which organization officials explain is indicative of the deteriorating situation regarding basic rights for residents of yishuvim.

MK Dr. Michael Ben-Ari questions why such orders are not given to anarchists and other left-wing extremists who regularly attack security forces with firebombs and rocks at protests together with PA (Palestinian Authority) residents.

(Photo is illustration only)