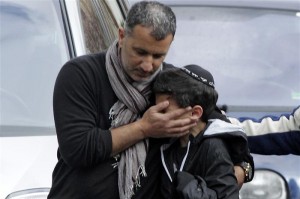 According to French investigators, the shooting occurred at 7:46 local time, when the lone motorcycle terrorist dressed in black stopped and opened fire in every direction. The teacher, Rav Yonatan Sandler HY”D, 30 was the first hit from close range. Sandler was holding the hands of his two boys and Gavriel (3) HY”D fell first, dead together with his father. Then came Aryeh (6) HY”D, who was also hit, falling lifeless to the ground.

Witnesses explain the gunman stopped shooting for a brief moment, apparently to change clips in his gun. He entered the school and grabbed Miriam Monsonego (8) HY”D as she was running. He grabbed her hair and fired at her body. As she bled out and slumped to the floor, he listed her head and fired two shots at her head from point blank range to make certain his Jewish victim would not survive.

The attack had a profound impact on the local community, shock and anguish are some of the terms being used, as many area residents, Jews and non-Jews alike have been placing flowers on the scene of the attack, seeking to identify in some way.

The bodies of the Sandler family are on the way to Eretz Yisrael for kvura in Jerusalem on Wednesday, 27 Adar 5772. Several dozen members of the French Jewish community will be attending the levayas in Yerushalayim. When the bodies arrive, they will be met by Zaka ambulances for transport to the capital. Miriam will be laid to rest in France.