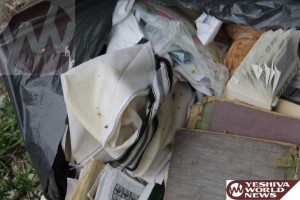 Misaskim was summoned by officials from the 62nd Precinct, Wednesday afternoon, after a truck loaded with shaimos was discovered on 62nd Street in Borough Park.

A Borough Park resident, who noticed the abandoned truck with out-of-state license, contacted Assemblyman Dov Hikind’s office. The shaimos was found after an initial investigation by members of Hikind’s office. Assemblyman Hikind was outraged. “This is not the first time that con artists have pulled this kind of stunt,” said Assemblyman Hikind. “The disposal of shaimos is often done around Pesach when people are cleaning and they have no idea who it is that’s accepting their packages of shaimos on the streets. It’s a cash-and-carry business that’s ripe for scammers. What an absolute disgrace.”

Borough Park residents echoed similar grievances after learning about this travesty. Many called for new regulations to prevent this from happening again in the future. It was obvious that most people were aware about the unkosher practices of these so called “shaimos collectors” as similar occurrences began to circulate as soon as the discovery was made.

The 62nd Precinct is working with community organizations to ensure that the shaimos is handled appropriately. Misaskim Volunteers at the scene spotted additional shaimos items strewn around in a nearby yard and as far out as on the train tracks. The volunteers are collecting the shaimos to ensure a proper burial.