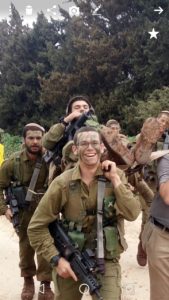 The IDF spokesman permits publicizing that the Israeli murdered in the morning vehicular terror attack was a soldier.

Corporal Elchai Taharlev HY”D, 20, a resident of Yishuv Talmon in the Shomron, was killed when the Arab terrorist rammed a vehicle into persons at Ofra Junction.

Elchai served in the 13th Battalion of the Golani Brigade and with his death, he is posthumously promoted to the rank of sergeant. As part of his hesder service, he was a talmid in Yeshivat Tekoa in Gush Etzion as well as a graduate of the Mekor Chaim Yeshiva High School.

A second soldier sustained light injuries and is being treated in Hadassah Ein Kerem Hospital in Jerusalem.

Elchai is survived by his parents and three brothers and three sisters. His father, Rav Ohad, is head of Medreshet Lindenbaum, part of the Ohr Stone Network. His mother, Avital, is the deputy director of a Ministry of Education psychology unit.

The levaya will take place today, Thursday, 10 Nissan, at 6:30PM in the Har Herzl Military Cemetery in Yerushalayim.