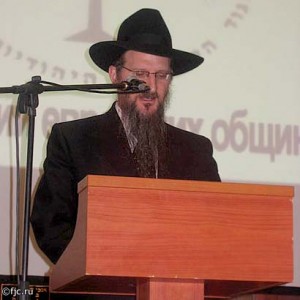 Russia’s back-in-office President Vladimir Putin can be sure that he has a steadfast supporter in Rabbi Berel Lazar, the country’s Chief Rabbi and Head Shliach.

With continued criticism against the Kremlin’s growing control and Russian Jewish leadership which doubted “Putin’s commitment to protecting Russia’s Jews,” Lazar stands out.

“There wasn’t a single thing that he was asked to do to benefit Judaism or the Jewish communities that he did not respond to positively,” Rabbi Lazar said about Putin, who has been ruling the country since 1999.

As President and Prime Minister, Putin “constantly took interest in the situation of the Jews in the country, showed care for their needs and has done a lot to eradicate anti-Semitism and returning Jewish buildings that were nationalized,” Rabbi Lazar told the Israeli haredi ‘Hamevaser.’

“We are nearing completion on a Jewish museum which will be one of the largest in the world. President Putin has contributed alot for the advancement of its building and he himself donated one paycheck of his, which led many others to donate as well,” he added.

Putin was inaugurated in lavish ceremony in the Kremlin on 7 May 2012 in front of the inner circles of the Russian establishment. Among the religious leaders attending were Rabbi Lazar and Alexander Boroda, the Chairman of the Board for the Federation of Jewish Communities of Russia.

“I blessed him in the name of Russian Jewry and told him that the number three in Judaism symbolizes a ‘Chazakah’ (a Halachic term for permanence),” Rabbi Lazar said.

WATCH: Obama Rips Into GOP For Aiming To “Rig Elections”