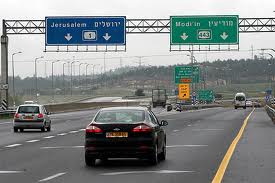 It’s time to say goodbye to a significant portion of the Jerusalem-Tel Aviv Highway, for 42 months — as the major roadway is being expanded. Stage one of the plan involved Shar Haggai to Shoresh Interchange. This will compel drivers to shift to the Jerusalem-Modi’in Highway, Route 443, and for residents of that area, the nightmare is about to begin, in September, with a completion date of 2016.

Officials explain the work will be done as quickly as possible, well-aware of the hardship to motorists, adding there is a hope that more people will think in terms of public transportation as a solution. While the work is going on there will be lanes open to vehicles, but there will be major bottlenecking as a result, hence the suggestion to shift to 443 and buses.

Transportation Minister Yehuda Katz explains that the rebuilding of the Jerusalem-Tel Aviv Highway along with the ongoing construction of the new train between the capital and Tel Aviv, there will be a new reality, one placing the two cities 20 minutes apart from one another. The project includes tunnels and new interchanges.