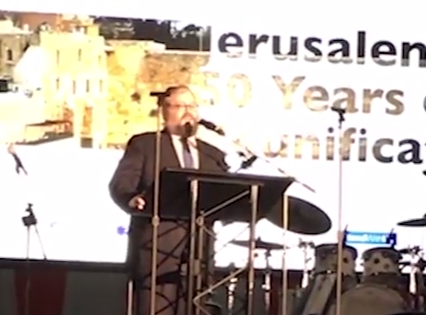 Rabbi Yehuda Kaploun, President of Water-Gen USA and a Lubavitcher chossid, chose to sign off his public address at the United Nations Headquarters in NY by mentioning that the day coincided with Gimmel of Tammuz and reiterating the bracha delivered by the Rebbe at the end of every Hisvaadus: “May we merit the building of the Beis Hamikdash in Yerushalayim Ir HaKodesh, with the coming of Mashiach Tzidkeinu.” This message was expressed at a special unity event held in the United Nations General Assembly Hall that marked 50 years to the reunification of Jerusalem.

Water-Gen USA is the American-based branch of an Israeli company that bears the same name. The company has developed advanced technology that produces water from air at high efficiency and impressively low cost, providing a solution for many countries that suffer from water shortage.

During the course of his speech, Kaploun expressed that his company was inspired, among others, by the actions of Shlomo HaMelech, wisest of men. Motivated by the understanding that water is vital to the wellbeing of his subjects and kingdom, Shlomo HaMelech saw to the construction of advanced water systems in every city and town under his jurisdiction. Water-Gen, asserted Kaploun, believes that use of its technology can stop the mortality of children who die of illness and disease that result from lack of water—a figure that currently stands at 1.7 million children annually; as well as prevent international skirmishes and even wars that develop as a result of struggles over vital water sources.