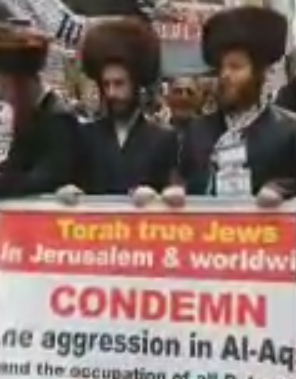 Neturei Karta members attended a Shabbos rally in Times Square to protest Israeli aggression on al-Aqsa. They actually walked from Williamsburg to Times Square to take part in the event on Saturday, July 22nd.

They protested “the recent Israeli attacking the Al-Aqsa”.

Organizers of the protest announced, “Due to the religious restriction of the Jewish Sabbath, the Rabbis where walking in in a hot weather of over 91′ degrees, all the way from the Williamsburg section of Brooklyn, through the Williamsburg bridge, a walk of about two hours but cannot speak on the microphone”. However, their message to supporters was read.