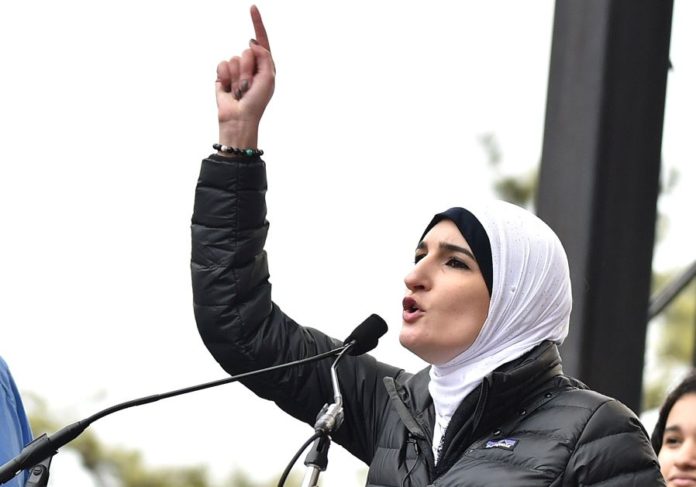 I was so relieved to read that Linda Sarsour had shown up to give support to former San Francisco 49ers quarterback Colin Kaepernick. Who knew what a huge football fan Sarsour was? Sarsour, the self-appointed princess of protest, can always be counted on to assure the world that football players matter, black lives matter, green and purple and red lives matter, and even Jewish lives matter if they aren’t too Jewish or, Heaven forbid, pro-Israel.
Standing in front of the Park Avenue building in New York City that houses the offices of the National Football League, Sarsour shrieked, “We will not be silenced by blue lives matter—by white supremacists—by neo Nazis—by right wing Zionists!”

It was eye opening to the many who didn’t know that right-wing Zionists run the NFL. Most of Sarsour’s followers only believe that Zionists run the banks. Always a stickler for details, that Sarsour.

Of course, some might suspect that Sarsour’s obtrusive presence at the NFL building was just an opportunity to hijack attention and get Sarsour another 15 minutes of infamy; that nothing more was on her mind than another occasion to proclaim that it’s the evil Jews at the core of every problem. Hitler used to say things like that, too. In fact, all classical anti-Semites do that.

But Sarsour isn’t an anti-Semite. She tells us that every chance she gets and even finds a gaggle of confused Jews along the way to back her. Sarsour is about justice for all. That’s why she’s flying to Texas right now to stand with the flood victims and make it clear that the Zionists made it rain.