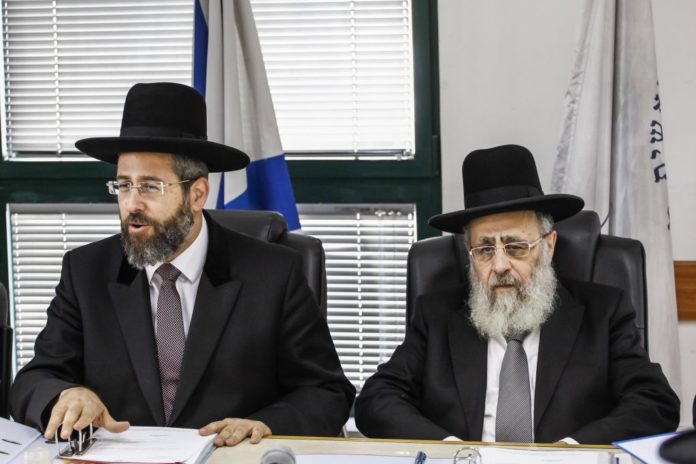 The Chief Rabbinate of Israel has initiated court inquiries into the Jewishness of Israeli citizens, including people who have previously been confirmed as being Jewish. In addition, the Rabbinate has vastly increased the investigations if the Jewishness of olim (immigrants to Israel), according to an appeal filed about a month ago in Israel’s Supreme Court. In the appeal, the ITIM organization, an NGO working to make religious services in the country transparent and respectful, represents several families whose Judaism has been questioned by the rabbinical courts, as well as organizations who are working to change the rabbinates policy – the Center for Women’s Justice and the Rackman Center at Bar Ilan University.

This data shows that from 2011 to 2016 there has been a rise of over 100% in the number of people labeled “pending confirmation of Jewish status” and during the same period, there has been a staggering 460% rise in the number of people rejected as “non-Jews” by the rabbinical courts. The Rabbinates database has existed since 1954, yet approximately 22% of those whose Jewishness has been nullified by the courts have been added in the years 2015-2016 alone.

Since Israeli law puts authority over marriages and divorces in the hands of the rabbinate, the meaning of the data presented above is that a significant number of Israeli olim cannot marry Jews, who are the overwhelmingly dominant segment of Israel’s population.

The appeal to the Supreme Court comes after a series of cases that occurred over the past few of years – in which Israelis living as Jews, many of them married through the Israeli rabbinate, received letters from the rabbinical courts notifying them that their Jewishness was now under investigation. Generally, this was a result of their relatives registering for marriage and being requested to provide “proof of Jewishness”. The letters demanded that they must come to a state rabbinical court for a reexamination of their Jewishness. In all the cases, the rabbinical courts nullified the Jewishness of the families, several of which refused to participate in the process.

In December 2016, as a reaction to ITIM’s actions in the Supreme Rabbinical Court, the Chief Rabbinate issued a new ruling instructing the courts to initiate investigations of Jewishness and add Israeli citizens who do not provide information on their Jewishness to the rabbinates database.

The instruction said that “If, following a discussion at the court, a doubt has arisen considering the Jewishness of a relative of a side to the discussion (heretofore – a third party) the court would notify the third party that following the discussion a need has come up to clarify the matter of their Jewishness for the purpose of marriage according to Jewish law, and this third party is entitled to join the discussion as a side and make its claims or ask to clarify the matter of Jewishness separately (…) insofar as the third side did not announce its agreement to a discussion of its case, the court will instruct on registering the third side in a list of people where Jewish status requires clarification.” Following this instruction, the Great Rabbinical Court rejected ITIM’s appeal.

In the appeal filed on August 13 at the Supreme Court, by Advocates Elad Caplan and Sara Weinberg, ITIM recounts the personal stories of former olim whose Jewish status has been inexplicably revoked, after having been already confirmed in the past: “These are family members who have undergone thorough examination of their Jewishness and came to live in Israel, they supplied countless proofs of the Jewishness a second time for the purpose of getting married under the rabbinate’s supervision, and they live and raised their children in the State of Israel for dozens of years as Jews for all intents and purposes.

“Suddenly, as lightning from the heavens, and without their will or consent, a cloud of doubt is cast over their Jewishness. They are required to answer to the rabbinical court, without having done anything to deserve a trial over their Jewish identity. They are again asked to present personal documents, run between consulates and produce other documents from abroad to please the court and to undergo tiresome and bothersome interrogations. There is not enough space to describe the personal and emotional damage this situation creates.”

As part of the appeal, ITIM claims that the rabbinical courts have no authority, by law, to investigate or reject, on their own initiative, the Jewishness of its citizens. The organization further claims that this may create chaos in the public sphere of Israel, a country founded on an influx of olim. Finally, the organization notes that this is also in contravention of Jewish law.

Over the past three decades, the number of olim has been significant, and is estimated at almost 1.5 million people. While over 70% of these olim are Jews according to the legal and religious laws, the imposing of such draconian inspections of Jewishness will mean that the religious status of these people will no longer be certain.

Rabbi Dr. Seth Farber, director of the ITIM organization, notes that “This is a very worrisome trend. Israel is a nation of olim, immigrants. If this continues, it puts in danger the most basic human rights of more than a million of Israel’s citizens. Beyond this, it is also against Jewish law, which states that one must take at the word a person who says they are Jewish. What is actually happening here is that a small group within Jewish orthodoxy reorienting extremists is imposing its fundamentalist views over the Israeli olim population. It is using its political leverage to engage in what is essentially an inquisition. We intend to fight this trend at the Supreme Court.

“The rabbinate and the state of Israel are undermining the principles on Zionism which posits that Israel should be a home to all Jews. Rather than embracing olim, the state seems to be seeking to push them away. This cannot be allowed to continue. Behind each story are real families who have had the carpet pulled out from under their feet. Halachic Judaism is not meant to cause suffering. By initiating Jewishness investigations the rabbinate is further undermining its historic role in Israel.”