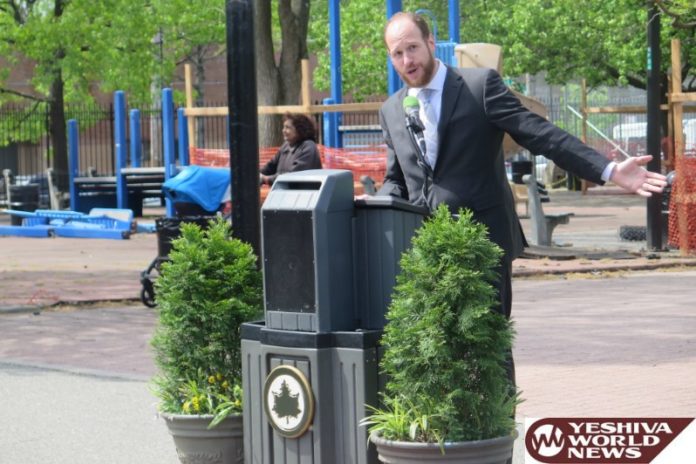 It won’t be hard for New York City Councilman David G. Greenfield to show his Midwood neighbors the impact he has had on their community after representing it for seven years at City Hall. In fact, all Greenfield will need to do is point to a tree, and that gesture will be easier than ever in Midwood after the nearly 1,500 trees Greenfield will have planted there by the end of his term.

“Once this project is done, Midwood is going to be at what’s called ‘planting capacity,'” Greenfield explained. “There are only so many places in New York City where it’d make sense to plant a tree, and by next year, there won’t be any more of those places left in Midwood. We’ve found out every single place that the Parks Department can put a tree, and we’re going to put trees in all of them.”

Greenfield has shown sustained commitment to his neighborhoods’ outdoor spaces, becoming the only New York City Council member to renovate every single park in their district, including last year’s extensive re-imagining of Gravesend/18th Avenue Park.

These improvements don’t come cheap. Just this year’s planting of nearly 1,000 trees, a record-shattering number for any New York City neighborhood, will cost $1,640,000. However, Greenfield believes that they’ll pay off many times over. In terms of the environment, trees absorb C02, alleviating the effects of climate change. They make economic sense too, increasing property values throughout the community by as much as 10%.

Yet even trees have their critics, principally homeowners who don’t want to worry about roots interfering with their sidewalks or plumbing. Regardless, Greenfield has made a deal with the Parks Department that they won’t plant his trees where a homeowner is opposed. “If you want a tree in front of your house, please call us and let us know and if you don’t want a tree, please let us know. Either way, we will accommodate you,” Greenfield said.

There’s no word yet on what type of trees will be planted, though a meeting is scheduled for later this week with Brooklyn Parks Department Commissioner Martin Maher to discuss the topic. Greenfield says that he’ll argue for big, picturesque specimens and no gingko trees, which are notorious for their unpleasant odor.

“I only have one rule: not stinky trees,” Greenfield joked.