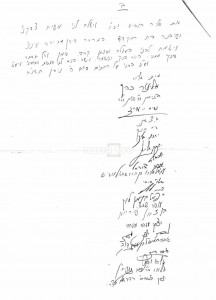 After the petira of HaGaon HaRav Mordechai Eliyahu ZATZAL there were reports that the gadol hador was buried with a special document.

This week, a new sefer was released, ‘משנתו של הרבי מליובאוויטש’, authored by Rav Meir Elituv. The sefer provides an in-depth look at the years of the late rebbe ZATZAL, including the last ‘yechidus’ with Rav Eliyahu.

According to the Chabad Online report, Rav Elituv proves that behind the Gemaras, and Medrashim that were recited with utter perfection in the room, in actuality, what was taking place was a din torah addressing if arrival of the Geula can immediately be brought about without Klal Yisrael having to suffer.

The rebbe asked Rav Eliyahu to be the dayan in the case, permitting him to present over 40 proofs to back his position while Rav Mordechai, in his capacity as dayan, brought proofs to refute the rebbe’s position.

At the end of this final ‘yechidus’, the dayan told the rebbe that he rules in his favor and the Geula should be ordered “now – immediately”.

The book includes the hand-written p’sak din from Rav Mordechai Eliyahu, signed by 23 rabbonim, (in line with a בית דין בענייני נפשות), most well-known and respected dayanim.

In line with the p’sak of his talmidim, the rav was buried with this p’sak din in his hand.