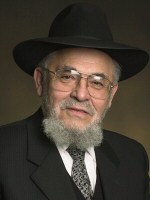 In the wake of recent news in New York City regarding Metzitzah B’peh, Rockland County officials are debating if this is a law that is necessary in their region as well. Rabbi Moshe Tendler, voiced his opinion and publicly opposes this ritual – in comments he made to the Journal News. He claims that in the interest of public health, it is imperative that Rockland officials gather the rabbis who support this practice, and demand their congregations and followers end it.

And if they choose not heed his advice, Tendler says “we will do what New York City did, and pass a law.”

This past Thursday, NYC became the first place in the United States to regulate Bris Milah. It has become a requirement in New York City for parental consent when performing Metzitzah B’peh. It is now mandatory that parents sign a form stating they are aware this practice includes a risk of herpes or other infections. According to Rockland Commissioner of Health Dr. Joan Facelle, there are no plans to outlaw or limit this practice as of right now. However, booklets warning parents about the risks are being provided to parents, so that they are aware of the dangers involved. “As a first step, we want to educate so people understand why there is concern about this practice,” Facelle said.

Tendler argues that metzitza b’peh is not a requirement for circumcision, and is a “prefabricated lie.” Others remain staunch in their belief that Metzitzah B’peh is an integral component of Bris Milah.

Tendler says he understands and even agrees that the government should not get involved, but he also predicts that if religious leaders do not act fast to ban the practice, the government will have no choice but to get involved. “The fact is that the child is exposed to danger,” he says. Danger that, in his eyes, can easily be avoided.