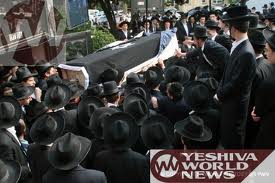 Assemblyman Gary S. Schaer (D-Passaic) and Senate Majority Leader Loretta Weinberg (D-Teaneck) today announced an agreement which aims to ensure timely burial for Jewish New Jersey residents. In most circumstances, under Jewish law, a person must be buried within 24 hours after death. The agreement is with cemeteries that are amongst the largest in New Jersey.

Since early 2011, Assemblyman Schaer, Senator Weinberg, the North Jersey Board of Rabbis and three major Jewish not for profit cemeteries have been in discussions to reach an agreement surrounding the issue of holiday and Sunday burial as well as other points. The agreement includes new understandings regarding holiday burial, Sunday burial, payment mechanisms, Medicaid burials, burials called in before and after 9:00 am, and burial societies. The agreement calls on all stakeholders to meet six months after enactment and then periodically after that to evaluate progress.

“I am proud of this agreement and its positive effects on the Jewish community in Bergen County and throughout New Jersey,” said Assemblyman Schaer. “There were times when I did not think a workable agreement was in our reach, but much to the credit of Rabbi Neal Borovitz the Board of Rabbis and the cemeteries; we have a strong compromise that will ease the burial process for many people during a difficult time in their lives.”

With respect to holiday burials, the agreement calls for the following:
Each cemetery will use its best efforts to accommodate burials on secular legal holidays. When a union agreement is in place, the cemeteries will include discussion of providing secular legal holiday burials with its staff as part of union contract negotiations.
If a cemetery is restricted by the terms of an existing union contract, the cemetery will include discussions of burial on a secular legal holiday in the next contract negotiation.
Reasonable holiday compensation to staff will be offered and appropriate costs passed through to families.
The cemetery will make any and all arrangements necessary to receive requests for secular holiday burials, including by making necessary contact information available.
If a funeral director or family member of the deceased must request a burial to take place on a secular holiday, he/she must call the cemetery by 9:00a.m. on the day of the holiday. If the request for a secular holiday burial is not complete by 9:00a.m., the cemetery at its discretion may extend the deadline, but the cemetery is not required to do so. The cemetery will make a good faith effort to accommodate the burial that day; however, the family and funeral home will be responsible for the total cost of the grave opening, including the secular holiday surcharge.
It is understood that the family and funeral director will make good faith efforts to schedule a holiday burial as early in the day as possible, and under no circumstances will a cemetery be required to schedule a burial arrival after 1:00p.m. on a secular holiday.
It is understood that once a grave opening order has been received by the cemetery, it may not be changed in any way without the prior consent of both the cemetery and family of the deceased. If a holiday burial order has been placed with the cemetery and is then canceled by persons other than the cemetery, all charges which were to be paid to the cemetery had the burial been completed will be paid by the family of the deceased or funeral home that placed the order. A cemetery will notify the funeral director of such obligations when the order is placed.

“I have been personally touched by my own constituents that have had trouble burying loved ones on a Sunday or a holiday such as Independence Day, Memorial Day or Labor Day. I am optimistic that today’s agreement will help mitigate some of those challenges and make the grieving process as hassle free as possible,” said Senator Weinberg.

The cemeteries involved in the agreement include Beth Israel Cemetery, Cedar Park Cemetery, and Riverside Cemetery.

Peter Blacksberg of Riverside Cemetery said, “We are pleased to participate with our extended Jewish Community in these discussions. For generations our cemeteries have serviced the Jewish community. We appreciate participation of our Rabbis, Senator Weinberg and Assemblyman Schaer in bringing to our attention specific issues which we have been able to address.”

“The ultimate goal of any New Jersey cemetery is to provide a place for family and friends to remember their loved ones. Today’s agreement demonstrates that by sitting around a table and discussing important issues, even difficult ones, we can produce positive results and lasting respect between all parties. This agreement, reached without the heavy hand of government, is truly historic,” said Judith Welshons, Executive Director of the NJ Cemetery Association.

Integral to the negotiations was Rabbi Elchonon Zohn, President of the National Association of Chevra Kadisha, an organization dedicated to ensuring Jewish burial throughout the United States and Canada.

“Much like our agreement in New York, New Jersey has today made a bold statement that religious burial practices and the business needs of cemetery operators are not mutually exclusive,” Rabbi Zohn said. “It has been an honor to work with Assemblyman Schaer, Senator Weinberg and all those involved to reach such a significant understanding.”

Each of the negotiating sessions were held at the Paramus offices of the Jewish Community Relations Council of the Jewish Federation of Northern New Jersey under the leadership of Rabbi Neal Borovitz and Ms. Joy Kurland.

“After countless hours of discussions, phone calls and emails, Jewish residents of northern New Jersey can rest assured that our religious cemeteries are dedicated to not only accommodating the adherence to Jewish law but also to engaging in an open dialogue about our mutual concerns going forward,” Rabbi Borovitz said. “Assemblyman Schaer and Senator Weinberg are to be commended for their tireless efforts urging both the Board of Rabbis and the cemetery operators to come to an agreement. We could not have done it without them.”