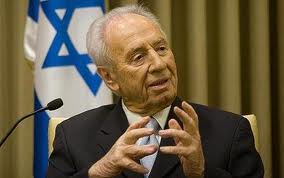 President Shimon Peres on Monday held a working meeting with Quartet Special Envoy Tony Blair. The two delivered joint statements and held a private meeting. At the start of the meeting President Peres said, “I wish to thank you for the clear support the international community is giving Israel to defend herself against the missiles, against the targeting of our civilians. I want to thank the Quartet and you personally.”

President Peres stressed that the aim of the operation was the cessation of rocket fire against the south, “We have no interest and no ambition in conquering land but we have to stop the firing at our citizens. You clearly understand what it means when mothers can’t sleep at night.” On Egypt’s involvement President Peres said, “The attempt by President Morsi is appreciated. Egypt is a significant player in the Middle East, strangely it is Hamas that doesn’t listen to the Egyptian President.”

President Peres addressed the Iranian issue and said, “Iran is putting tremendous pressure on them, supplying them with arms, training them and sending them money. There is a confrontation between the Iranians who want to continue Hamas’ belligerence and many of the Arab countries that want to put an end to it.”

Mr. Tony Blair thanked President Peres and said that he hoped that in the coming days a ceasefire will be achieved which will stop the rocket fire from Gaza to the citizens of Israel and will help the people of Gaza who are also suffering. Blair added that Egypt, Qatar, America and the UN were all working for a ceasefire and said that he hoped that there could be constructive steps towards peace in the region. Blair added that another crisis, on top of the Iranian issue and the Syrian crisis, should be avoided.