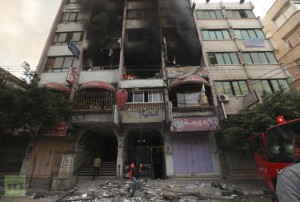 In what the Shin Bet is calling one of the most successful intelligence-based operations since Operation Pillar of Defense began last week, four senior Islamic Jihad terrorists were hit during an airstrike on a high-rise building in Gaza City, Monday afternoon.

It’s the second strike on the building in two days. The Hamas TV station, Al Aqsa, is located on the top floor. The building also houses the offices of Britain’s Sky News and Saudi-owned Al Arabiya Channel. Most journalists left the premises on Sunday following the initial strike.

Islamic Jihad identified the dead men as Ramiz Harb, one of its senior commanders.

Bahu al-Ata, an Islamic Jihad commander who is involved in the incessant firing of rockets toward Israel, was also in the building during the attack. Another terrorist, Taysir Jabari, who has orchestrated numerous attacks on Israel was also wiped out.

Another terrorist killed in the surgical airstrike was Hallil Bahatini, a senior Islamic Jihad commander who has also played a key role in the rocket fire on Israel’s south.