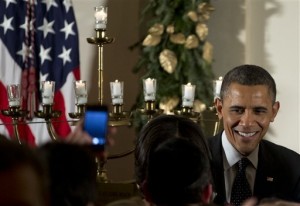 President Barack Obama says Hanukkah is a story of “resilience and optimism.”

He and first lady Michelle Obama held a White House reception Thursday on the sixth evening the Jewish Festival of Lights.

Thursday’s celebration included the reciting of traditional prayers and the lighting of candles in a 90-year old menorah from a temple in Long Island, N.Y., that sustained heavy flooding during Superstorm Sandy.

Obama said the menorah is “a symbol of perseverance” and “a reminder of resilience and hope in the fact that we will be there for them as they recover.”

REMARKS BY THE PRESIDENT AT THE CHANUKAH RECEPTION:

THE PRESIDENT: Good evening, everybody.

THE PRESIDENT: Well, thank you for coming to the White House tonight to celebrate the sixth night of Hanukkah. (Applause.) It is truly an honor to host so many leaders from the Jewish community this evening. Israeli Ambassador Michael Oren is here. (Applause.) And obviously I know I speak for all of us when we say that America’s support for our friend and ally Israel remains unshakeable during these difficult times. (Applause.)

Many members of Congress and local government are here, and we want to welcome you. We are graced by two Supreme Court Justices, several members of my Cabinet and administration — so, everybody, be on your best behavior. (Laughter.)

I want to thank the incredibly talented members of the West Point Jewish Chapel Cadet Choir for their service. (Applause.) They are incredible young people. Obviously we’re in awe of their service to our nation, and for sharing a couple of Hanukkah favorites with the Marine band.

And finally, I’d like to recognize the rabbis and lay leaders who traveled from all over the country to be here. Thank you for sharing the holiday with us. We’re grateful. (Applause.)

So tonight, as we gather to light the sixth candle of Hanukkah, we remember an enduring story of resilience and optimism. Over 2,000 years ago, a tyrant forbade the Israelites from practicing their religion and his forces desecrated the Holy Temple. So Judah Maccabee gathered a small band of believers to fight this oppression, and against all odds, they prevailed. And the Maccabees liberated Jerusalem and restored the faith of its people. And when they went to reclaim the Temple, the people of Jerusalem received another gift from God — the oil that should have lasted only one night burned for eight. That miraculous flame brought hope and it sustained the faithful.

To this day, Jews around the world honor the Maccabees’ everlasting hope that light will overcome the darkness, that goodness will overcome evil, and that faith can accomplish miracles.

The menorah that we’re using tonight and the man who will light it are both powerful symbols of that spirit. Six weeks ago, the Temple Israel Synagogue in Long Beach, New York, was badly damaged by Hurricane Sandy. But this 90-year-old menorah survived, and I am willing to bet it will survive another 90 years, and another 90 years after that. So tonight, it shines as a symbol of perseverance, and as a reminder of those who are still recovering from Sandy’s destruction — a reminder of resilience and hope and the fact that we will be there for them as they recover.

So I want to thank Rabbi David Bauman for sharing your congregation’s blessed menorah with us. We pray that its light will carry victims of Sandy and all Americans to a brighter tomorrow. And we’re confident that it will. (Applause.)

And we’re confident that it will because for centuries the menorah has served as a source of inspiration and courage for all those dreaming of a better future, and Rabbi Larry Bazer knows that as well as anybody.

Now, we had hoped that Rabbi would join us to light the candles last year, but he wasn’t able to make it. We don’t get that very often. Usually when we invite people, they come. (Laughter.) But we gave him another chance because he had a pretty good excuse the first time.

Last Hanukkah, Rabbi Bazer — and he happens to be the Joint Forces Chaplain for the Massachusetts National Guard — was four months into his deployment in Afghanistan, and he lit a custom-built electric menorah in the central square of Camp Phoenix in Kabul. As the only rabbi in Afghanistan at the time, he spent every night of Hanukkah with a different group of soldiers, reminding them of the Maccabees’ perseverance, and bringing them faith to guide their challenging work.

Even in the face of great danger, the message of Hanukkah endures. And it continues to inspire those all over the world who stand for freedom and opportunity, and we could not be more grateful to Rabbi Bazer for his extraordinary service to our country as well as his service to his congregation. (Applause.)

The Rabbi stands here alongside this menorah both as a symbol of hope and perseverance and determination and duty. And it also reminds us that there are sacrifices that are involved in defending our values. Obviously we’re grateful to the men and women who serve our nation so nobly and so bravely all around the world. (Applause.) And our thoughts and prayers in this holiday season especially go out to those who are away from home during the holiday season.

But obviously the lessons of Hanukkah also apply to those of us who should be serving in different ways in our own communities, in our work places, in our own families as citizens of this nation; that we have obligations to one another, that we’re stronger together than we are apart, that we have to think about future generations and not just the present.

Those are all values that we have to also make sacrifices to defend. And so I want to welcome all of you. I’m honored to be with you. I see a lot of good friends around the room. But at this time I’d like to invite Rabbi Bazer to join me to light the White House menorah.

(The blessing is offered and the menorah is lighted.)

THE PRESIDENT: Have a wonderful evening, everybody. We’re going to go around and try and shake some hands.