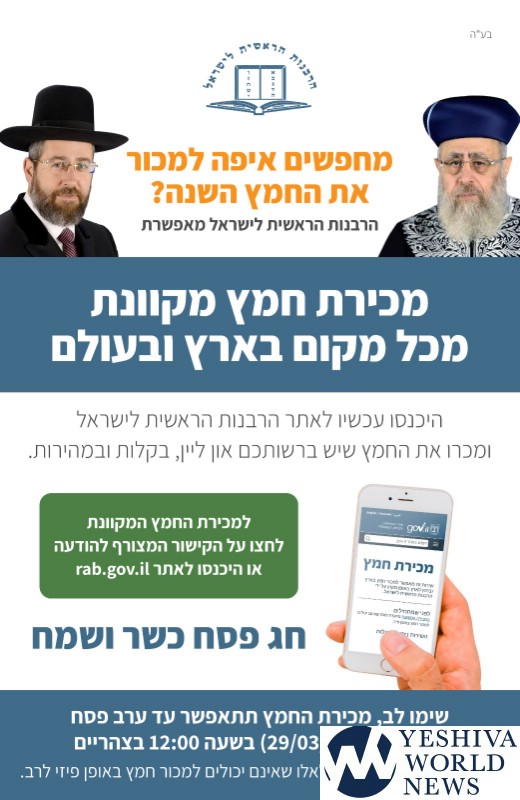 Note: Leading halachic authorities have ruled that online authorizations are acceptable for the purpose of selling chametz. The traditional and preferred practice, however, is for the authorization transaction to be done in person with the local rabbi.  The Rabbanut of Israel now makes this service available online at no charge, to provide every Jew with the opportunity to have their chametz sold for Passover.

The Rabbanut of Israel is offering Jews worldwide the opportunity to sell their chometz online.  It now takes less than one minute to delegate a Rabbi to sell your chometz, by filling out a simple form specifying name, address, location of chometz.

While it has maintained a website, this year, one will be able to sell one’s chametz online from any place in the world.

One may sell one’s chametz online until erev Pesach, 13 Nissan, at noon.

It is pointed out that the online sale is intended for those unable to sell their chametz directly to a rav.

The question is, however, is such an arrangement permitted according to halacha?  And if indeed it is permitted  – is it ideal?

THE VIEW THAT THERE IS A NEED FOR KINYAN

Rav Gavriel Zinner in Chapter 45 of Nitei Gavriel Hilchos Pesach Vol. I cites the Sefer Tcheiles Mordechai #96 (By the Maharsham in the Shabbos HaGadol Drasha section) that an effective Kinyan is required to effect the agency – or messenger-ship of the Rabbi to make the sale.  The note states that Dibbur – speaking it out – is not enough.  He does rule, however, that if he is in a distant place he may indeed appoint a Shliach through a letter or by telephone or in some similar manner.

One might infer from this that it is best to avoid conducting such a transaction by telephone or by the internet.

However, it is clear from the Shulchan Aruch (CM 182:1) and the Vilna Gaon (loco citado) that there is, in fact, no need whatsoever to make a Kinyan when appointing a Shliach.  This is also clear from the Gemorah in Bava Metziah 98b.  This applies to all cases of sales as well.  There is also no need for witnesses either.

The Ramah explains that a Dibbur, a verbal declaration or statement is sufficient, as all that is required is Gilui Daas, a revelation that this is the desire of the owner.

The Minhag, however, has always been to sign the shtar harshaah for the Rabbi, appointing him as a Shliach.  We see this in the responsa of the Tzemach Tzedek OC 46.  Perhaps the reason for this Minhag is so that the gentile purchasing the Chometz from the Rabbi will have the correct smichas daas to ensure that it is a valid sale, since many question the entire process and label it haarama – a workaround that is quuestionable.  The Rambam (laws of Mechira 5:13) is suggestive of such an understanding.  He writes there that there are things that do not require a Kinyan, but people do so anyway to indicate that they are not joking but that there is real gmiras daas – full intent of sale.

BECAUSE OF CHOMETZ THAT IS NOT YET EXTANT

Another possibility is that when selling Chometz that is not yet extant, an appointment of a Shliach may not be enough, and a Poel, a worker of the owner, may be preferable.  Some of the people’s Chometz is a davar shelo ba leolam if they are to purchase new chometz that they will sell and the oral permission may not be sufficient for this.

YAD POEL – THE HAND OF THE WORKER IS LIKE THE OWNER

The concept of yad poel keyad baal habayis (See Bava Metziah 118a), the hand of the employee is like the hand of his boss –  may address this issue too.  So a kinyan may make the Rabbi an employee rather than a mere messenger.  Not everyone would necessarily agree to this understanding, however.  And many people do not conceive of an employee relationship being developed with the maaseh Kinyan.

All this discussion deals with orally agreeing – we are discussing, however a case of performing the appointment of the messenger on the internet.  Although a transaction on the internet is questionable in terms of Jewish (and gentile) contract law – it actually addresses the issues brought up here better than a mere oral statement.  In terms of the Rambam’s explanation, the issue of not joking and having Gmiras daas is certainly addressed.  The process on the internet, does not seem to constitute a form of kinyan, though.

SUPPORTING THE RAV OF THE COMMUNITY

All this is in terms of the actual halacha as to whether it may be done by internet or phone.  There is another issue, however.  It is a tradition in Judaism to sell one’s Chometz through the Rav of the community.  This is, in fact, part of the traditional means of compensating the Rabbi for all that he does throughout the year.  In the past few years, we have witnessed a dramatic proliferation of Rabbis who are “opening up shop” just for Mechiras Chometz.  While there is nothing wrong with multiple sales of Chometz through a number of Rabbis (See Minchas Yitzchok VI #38 – who encourages the practice) – the sale of Chometz through the internet or by phone should not replace the Shlichus money given to one’s regular Rav for all that he does.

There is no question that the service provided by the Rabbanut is wonderful. And the intent certainly constitutes a tremendous service for Klal Yisroel as well as an educational tool. It is especially relieving to those whose schedules are so busy that they just cannot get to their regular Rav.

However, it should be done in addition to the sale of one’s regular Rav and not instead of it. There are many Rabbis who rely on the yearly income of selling Chometz to support their fine work.  So let us keep this in mind. May we all have a Chag Kasher veSameach!