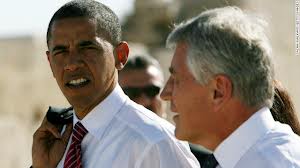 Digging in for a fight, President Barack Obama riled Senate Republicans and some Democrats, too, on Monday by nominating former senator and combat veteran Chuck Hagel to lead the Pentagon and anti-terrorism chief John Brennan as the next director of the Central Intelligence Agency.

Hagel and Brennan, in separate Senate confirmation hearings, will face sharp questions on a range of contentious issues, including U.S. policy about Israel and Iran, targeted drone attacks and harsh interrogation tactics. Of the two men, Hagel is expected to face a tougher path, though both are likely to be confirmed.

Hagel would be the first enlisted soldier and first Vietnam veteran to head the Pentagon.

“These two leaders have dedicated their lives to protecting our country,” Obama said, standing alongside them and the men they would succeed during a ceremony in the White House East Room. “I urge the Senate to confirm them as soon as possible so we can keep our nation secure and the American people safe.”

For Obama, a pair of combative confirmation hearings could turn into a distraction as he opens his second term. But the president signaled he was ready to take that risk.

Hagel, a former Republican senator from Nebraska, has been criticized as hostile toward Israel and soft on Iran. Opponents also have highlighted his 1998 comments about an ambassador nominee whom he called “openly, aggressively gay” — a comment for which he recently apologized.

Brennan, a 25-year CIA veteran, was under consideration to run the agency after Obama won the 2008 election but withdrew his name amid criticism from liberal activists who questioned his connection to the harsh interrogation techniques used by the CIA during the George W. Bush administration.

One of Hagel’s toughest critics, Sen. Lindsey Graham, R-S.C., called his former colleague’s foreign policy views “outside the mainstream” and said he would be “the most antagonistic secretary of defense toward the state of Israel in our nation’s history.”

Perhaps even more concerning for Hagel’s prospects has been the tepid response from some Democrats. Sen. Chuck Schumer of New York said Hagel had earned the right to a full and fair confirmation hearing, but he reserved judgment on whether he would back him. And Maryland’s Democratic Sen. Ben Cardin said he and other lawmakers “have questions that have to be answered” specifically on Hagel’s views on Iran and Israel.

Obama called Hagel “the leader our troops deserve” and someone who could make “tough fiscal choices” in a time of increasing austerity. The Pentagon is facing the potential of deep budget cuts in the coming months.

The 66-year-old former senator has defended his record on Israel and Iran. In an interview Monday with the Lincoln (Neb.) Journal Star newspaper, Hagel accused his opponents of having “completely distorted” his views.

Hagel has criticized discussion of a military strike by either the U.S. or Israel against Iran. During his tenure in the Senate, he voted against unilateral economic sanctions on Tehran, though he supports the joint international penalties Obama also prefers. Hagel also irritated some Israel backers with his reference to the “Jewish lobby” in the United States.

The White House focused instead Monday on the military record of Hagel, who was awarded two Purple Hearts.

“Chuck knows that war is not an abstraction,” Obama said. “He understands that sending young Americans to fight and bleed in the dirt and mud, that’s something we only do when it’s absolutely necessary.”

The president, who prefers to keep a tight inner circle, has close ties to both Hagel and Brennan. Obama and Hagel served together in the Senate and made several trips overseas. Brennan has become one of the president’s most trusted advisers, working with him during the planning of the raid that led to the death of Sept. 11 mastermind Osama bin Laden and holding broad authority over the administration’s counterterrorism operations.

If confirmed, Hagel and Brennan will join Secretary of State nominee John Kerry as Obama’s key national security advisers in his second term. Kerry, a longtime Democratic senator from Massachusetts, is expected to be easily confirmed by his Capitol colleagues.

At the top of Obama’s national security agenda will be winding down the U.S.-led war in Afghanistan by the end of 2014. Key decisions on troop withdrawals are looming, and Hagel is expected to favor a more rapid drawdown than some generals have suggested. Brennan, having served as Obama’s top counterterrorism aide for the past four years, would bring to the CIA a deep understanding of al-Qaida in the region.

For Brennan, Monday’s nomination represents a second chance at the spy agency’s top job after his withdrawal from consideration in 2008.

In a letter to Obama at that time, Brennan said he was “a strong opponent of many of the policies of the Bush administration, such as the pre-emptive war in Iraq and coercive interrogation tactics, to include waterboarding.”

White House officials say they don’t expect Brennan to face similar trouble this time around given his four years of service in the Obama administration.

“The issue has been removed from the debate because the president and John Brennan, as his top counterterrorism adviser, brought those techniques to an end,” said Ben Rhodes, Obama’s deputy national security adviser.

But some lawmakers and outside groups aren’t as easily convinced. Sen. John McCain, R-Ariz., issued a statement about Brennan saying he had “many questions and concerns about his nomination to be director of the Central Intelligence Agency, especially what role he played in the so-called enhanced interrogation programs while serving at the CIA during the last administration, as well as his public defense of those programs.”

Brennan’s nomination will also put a spotlight on the administration’s controversial drone program. He was the first Obama administration official to publicly acknowledge the highly secretive targeted killing operations, defending the legality of the overseas program and crediting it with protecting American lives and preventing potential terror attacks.

The American Civil Liberties Union voiced its concerns over Brennan’s nomination Monday, saying the Senate should not move forward until it is clear the nominee “will end its targeted killing program.”

Brennan would replace Michael Morell, the CIA’s deputy director who has been acting director since David Petraeus resigned in November after admitting to an affair with his biographer. Hagel would replace retiring Pentagon chief Leon Panetta.