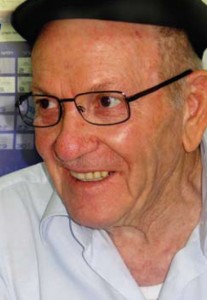 Mekubal Rabbi Chaim Cohen of Givatayim, known as the “Chalban” was saved from an attempted stabbing on Sunday 21 Adar 5773.

According to a Yisrael Hayom report, during shachris on Sunday morning, at 6am, a person entered the Ben-Gurion Street shul in Givatayim acting in a disorderly fashion. At some point, he pulled out a knife and began shouting “I will murder you” as he headed to the Chalban.

Baruch Hashem the mispallalim overpowered the man and held him until police arrived and placed him in custody. Police report the 43-year-old Rishon L’Tzion man in custody has two prior arrests for violent attacks and he tried to attack Rabbi Cohen last month. Defense Attorney Sandy Almogi told the court at the remand hearing that the suspect denies the allegations against him.