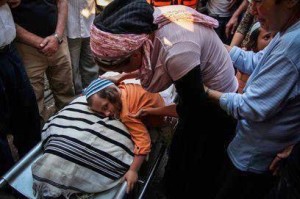 The father of terror victim Evyatar Borovsky HY”D, Baruch, spoke with Galei Tzahal (Army Radio) a number of hours after the fatal attack. The bereaved father spoke with the media hours before his son was being laid to rest. He explains that he heard about the attack in the news and had an uncomfortable feeling when a map of Yitzhar was shown with the TV report. He opted not to say anything to his wife, not wishing to worry her.

He described his son as “a tzaddik”, adding he was in the middle of a medical clown course and his entire being surrounded assisting others. He added painfully that the eldest child [of Evyatar] is seven and the youngest, one. “I could not speak with his wife. She is totally destroyed” Baruch added.

Baruch further explained that Evyatar HY”D recently purchased their home in Yitzhar despite his efforts to encourage him not to. “It did not help. I don’t case for the population in Yitzhar that identifies with the hilltop youths but I am his father and we worked to fix up their new home.”