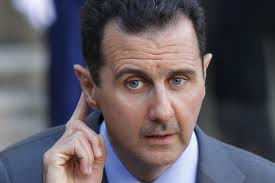 Minister of Intelligence & Strategic Affairs (Likud) Dr. Yuval Steinitz favors the ousting of Syrian leader Bashar al-Assad, a move which he believes will deliver a significant blow to Iran and the Axis of Evil, Maariv reports. The minister reportedly made his remarks during a session of the Knesset Foreign Affairs & Defense Committee on Monday, 11 Sivan 5773. Committee members were in agreement with his assessment.

Ironically, the minister’s position seems to contradict the position of the ISA (Israel Security Agency – Shin Bet) and the IDF’s General Staff, which feels it is in Israel’s interest not to topple Assad, realizing the border with Syria has been quiet since over past decades and the rise of the rebels to power would be accompanied by much uncertainty.

Prime Minister Binyamin Netanyahu recently stated Israel does not plan to intervene in the warfare in Syria, but it will not permit the transfer of weapons to Hizbullah and Jerusalem will not tolerate weapons fire into Israel.