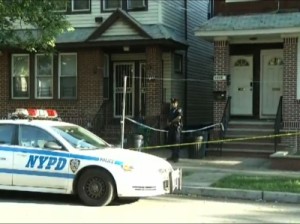 UPDATE 10:20AM Tuesday: A highly credible source tells YWN, that the person in custody had jumped in front of a train around a week ago. The incident occurred on Avenue J an East 16th Street, and at the time, the victim was in critical condition. His current condition is unknown. The incident was reported at the time on YWN NYC.

UPDATE 8:50AM Tuesday: The decomposing body of a woman was discovered in a Brooklyn home Monday night, along with a note claiming the victim had been casting spells on her husband.

The 57-year-old woman was found by police responding to a report of a foul odor coming from the home on Avenue N in Midwood just before 9:45 p.m.

Officers found the victim’s body in in the basement in a severe state of decomposition. She is estimated to have been dead for at least a week.

Police say she had been stabbed multiple times in the back.

The officers discovered a note on her body, purportedly written by her husband, claiming that she was casting spells on him.

Detectives were looking for the husband, who has not been seen recently. As a result of the ongoing investigation, a person of interest has been taken into custody, but it not clear who that person was.

Identification of the victim is pending proper family notification.

FIRST REPORT 10:45PM Monday: The NYPD is investigating a homicide in the heart of Flatbush, Monday night.

Sources tell YWN NYC, that a female was found with multiple stab wounds in the basement of a home on Avenue N and East 14th Street. She was apparently murdered more than a week ago, and just discovered this evening.

A crime scene has been established, with numerous detectives on the scene interviewing neighbors. The NYC Medical Examiners Office is on the scene, as well as volunteers from Misaskim.

UPDATE 6:15AM Tuesday: The NYPD has taken a person of interest into custody in regards to this case.

No further information is available about the victim or the incident.