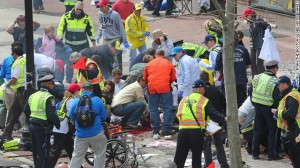 The last person hospitalized with injuries from the April 15 Boston Marathon bombings was discharged on Monday, still facing a long recovery from the loss of her left leg and severe injuries to her right leg.

Three people were killed and 264 injured, many losing legs, when two homemade pressure-cooker bombs exploded near the finish line of the race.

Erika Brannock, 29, a preschool teacher from Baltimore, had traveled to the city with her sister and brother-in-law to support her mother, who was running her first marathon. They were standing near the finish line when the first bomb exploded.

Brannock, who spoke to reporters outside Beth Israel Deaconess Medical Center in Boston, said she remembered her sister gently pushing her forward toward the front of the crowd before “everything went silent and I saw flashes of orange and yellow, and I fell backward slowly and then finally came to and could hear the screaming and the crying and the sirens.”

Shortly after the blast, a stranger who identified herself only as Joan from California called out and grabbed her hand, saying, “I’m not going to let you go,” Brannock said.

“She stayed with me through the whole experience of people taking care of me and everyone attending to my wounds until I got on the stretcher and was taken off to an ambulance,” she said, holding back tears.

“Wherever you are, you saved my life,” Brannock wrote in a separate statement.

Brannock sustained a traumatic amputation of her left leg above the knee and severe injuries to other leg, said Dr. Edward Rodriguez, an orthopedic surgeon. Doctors worked to save her right leg and performed multiple procedures to reconstruct bone and soft tissue.

“She will have a long course ahead” and may require further surgeries, the doctor said. “This is certainly not over.”

Their mother, Carol Downing, 57, of Monkton, Maryland, was less than a half mile from the finish line when the bombs exploded and was not injured. She said she plans to run the marathon again next year.

Though Brannock was the last of the bombing patients admitted on April 15 to be discharged from Boston area hospitals, one patient treated that day and discharged was recently readmitted, a Beth Israel spokesman said.

Brannock said she will be fitted with a prosthetic and expects to walk again. She plans to focus on rehabilitation and getting back to teaching, she said.

“I’ve had some very dark moments, but … I’ve had world-class care here with incredible compassion,” she said.

A suspect in the bombing, Dzhokhar Tsarnaev, was captured in a dramatic police manhunt days after the bombing. His brother, Tamerlan Tsarnaev, also identified as a suspect, was killed in a gunfight with police. Investigators suspect they had Islamic militant sympathies.