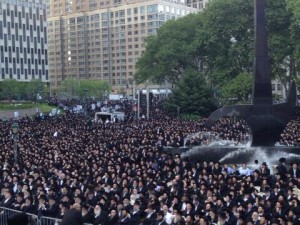 In an audio obtained by YWN, The Satmar Rebbe (KJ) told his followers last week that out of respect for the various communities who are to participate at the anti-draft protest Sunday, Satmar has agreed to compromise in muting anti-Zionist rhetoric at the protest. “I want to ask all of our followers to belt themselves with patience and comprehension,” the Rebbe said.

Representatives of Satmar and the CRC also claimed, Saturday night, on the Zev Brenner Show that the protest is strictly limited to the issue of Haredi Draft.

However, during the protest attended by 25,000 people, mostly of the Satmar sect, anti-Zionist rhetoric was the theme in secondary to the initial purpose of the protest – which was to protest the Israeli government’s initiative to draft Yeshiva students in the army at the age of 21. The speakers compared the ‘Zionist regime’ as the equivalent of ‘Amalek, calling it the regime of evil.

“For over sixty years the regime in our holy land is blaspheming the name of God,” one of the speakers screamed from the podium. “They are not in need of Haredi boys to serve. The purpose is to put our boys through a ‘melting furnace’ to assimilate them.”

“We are not new to protesting against Israel but this decree is worse than before. They are trying to convert the voice of Jacob to the sword of Esau,” said Rabbi Berl Katz of Dushinky Shul in Williamsburg.

“The very existence of the state is a rebellion against God,” declared Rabbi Nachman Stauber. “The [IDF] army was founded on murder and blood spilling.” he also called out Finance minister Yair Lapid as a “Rasha ben Rasha (Evil the son of Evil).”

Audio of some of the remarks at the protest:

h/t Yosef Rapaport for some of the quotes